BC, LCM start anew on gridiron 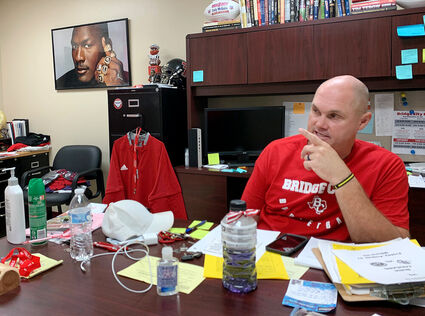 The Friday night lights go on for keeps this week as the 2021 Texas high school football season kicks off.

At least one team – Bridge City – will be plenty familiar with the lights, though.

Under new head coach Cody McGuire, the Cardinals have been hitting the field for 5:30 a.m. workouts since school classes began two weeks ago.

No after-school workouts for these guys.

“It’s the way Coach (Todd) Dodge did it in Austin and it’s really good for the heat here,” McGuire said. “Of course, it gets hot in Austin, too.

“The best part if we get off the field Wednesday morning at 7:30 and don’t do anything until Friday night at 7:30.”

McGuire was a member of Dodge’s staff at Austin Westlake the past two seasons as the Chaparrals won back-to-back Class 6A Division I state crowns.

He was hired to lift up a program that finished 1-6 a year ago competing in District 11-4A-I.

While the Redbirds will kick off their season at Buna Friday night, Little Cypress-Mauriceville fans will travel to Hamshire-Fannett to see their new coach, Eric Peevey, coach the Bears for the first time.

Four-time state champion West Orange-Stark is hoping to have Coach Cornel Thompson on the sidelines Friday at Nederland after Coach “T” spent time this week in a Beaumont hospital after testing positive for COVID-19.

Meanwhile, Orangefield will be hosting Anahuac Friday and looking to continue its playoff streak after earning the final berth from 11-4A-I and making the postseason with a .500 record.

Dodge, who grew up in Orange before becoming a Parade All-American in Port Arthur, played quarterback at University of Texas and has coached six state champs, four at Southlake Carroll and two at Westlake.

“It’s a learning process,” McGuire says of teaching a new system to those in a football program with its third leader in five years. “The kids have bought in to our strength and conditioning program, our new summer program, our spread offense and our 4-2-5 defense.

“It was good to get a head start on everything.”

McGuire’s coaching staff is totally new for him as well.

“These guys are doing a great job, and the varsity players have been incredible,” McGuire said. “We have talented kids who are willing to get after it.”

Numbers are at a premium for the Cardinals as they start the year.

That was not a problem for Peevey. He said he averaged more than 70 of a possible 80 players for summer conditioning and football skills sessions.

An Orangefield High graduate who once coached on the LCM staff, Peevey followed former Orangefield head coach Kevin Flanigan to Beaumont and replaced him as head coach in 2017.

In 2018, the Bruins won 13 games, a school record, and advanced to their second state title game and first since 1982.

They beat Dodge’s Westlake team in the state semifinals.

“Not too many people know it, but we broke every school record offensively, both passing and rushing,” Peevey said. “We scored 760-something points one season.

“And getting Jeff Breaux, who was with me every year I was head coach at West Brook, to come be our offensive coordinator, was high praise for me.”

Amier Washington should be a natural defensive end as the Bears switch from a 4-3 to a 3-man line Three-year starter Nich Granger roams the second level and the secondary should be strong with returner Carson Peet and newcomer Dwight Davis, the son of the defensive coordinator, moving after starting three years for Orangefield.

Braylen Collins is back in the mix after missing last season.

A bright spot should be an offensive line led by Matt Livingston, Hunter Bellanger, Ethan Ply and Isai Cantu.

West Orange-Stark, 8-1 a year ago out of 11-4A-II, is seeking to bounce back after the Mustangs failed to reach the regional finals for the first time during Thompson’s tenure.

The coach was doing well Tuesday afternoon, checking out of the hospital after experiencing breathing difficulties and being treated for blood clots in his lungs.

Orangefield, the smallest school in 11-4A-I, made the playoffs and went 4-5, “because my players were able to fight and scratch through COVID-19 and storms and all we had battle,” Smalley said.

“It was one of the better jobs our coaching staffs and players have done.”

When the 2020 alignment placed the Orangefield Bobcats in Class 4A, Division II after a two stint in Class 3A, Division I, many were forecasting gloom and doom for the Bobcats' playoff chances.  However, Josh Smalley and his Bobcats sent the message that they were not going to be an easy mark as the 'Cats scratched out a 3-3 district mark and a place in the playoffs.  Orangefield returns five starters on offense and eight on defense to keep the Bobcats in the playoffs.