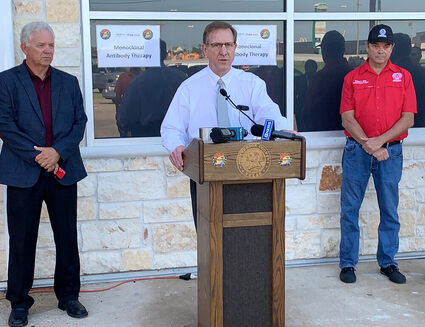 As COVID-19 infected another 691 of its residents this week, Orange County signed up with Jefferson, Jasper and Newton counties to establish an infusion center in Beaumont to treat the infected before they have to go to the hospital.

* Orange County Commissioners voted unanimously to grant a 10-year tax abatement for the medical center and mini-hospital at Interstate 10 and Highway 62.

* West Orange-Stark football coaching legend Cornel Thompson was released Tuesday after being hospitalized in Beaumont with COVID-19, he said.

Because of the way the county reports COVID stats, it's difficult to compare apples to apples (no written version of Tuesday's Commissioners Court COVID report was available at press time), and while 691 new cases were reported, the total number of active cases wasn't.

On the other hand, the reports posted on the Office of Emergency Management Facebook page dated Aug. 10 and Aug. 18 don't specify "new" cases, only active ones.

Joel Ardoin, EM coordinator for the county, said Tuesday the number was so high because of a backlog. Of the 691, he said 91 were confirmed and 600 were "probable," which meant it was a case in which a patient had symptoms but did not have a COVID test, or just a rapid test.

Ardoin said that 28 COVID sufferers from Orange County were hospitalized, and only two of those had previously taken the COVID vaccine.

The Texas State Department of Health Services reports Orange County had 957 active cases of COVID-19 as of close of business Tuesday. Nearly 10,000 county residents had recovered from COVID, while 162 have died. Only 31 percent of those 12 or over have been vaccinated.

While WOC avoided a board vote on its mask mandate which took effect Monday by including it as a "dress code" requirement, Orangefield's school district stressed that no decision regarding masks was on Monday's board agenda.

But four parents opposed to mask requirements made their opinions clear.

Most said they had older children who had their senior years "stolen" by COVID-19 shutdowns of graduation activities in 2019 or 2020 and all said they had small children still attending schools.

Juan Gonzalez said, "This whole county was locked down. We were in the same situation a year and a half ago, and nothing has changed."

He showed a picture of people wearing Level 4 Hazmat suits and said that was the only dress code that would protect students and staff with 99% surety.

"There's tons of info out there showing that masks don't work," parent Dean Crooks said. "Since we don't have a silver bullet guaranteeing anything. But we're parents. Let us be responsible for our children's health.

"I ask the board to let us protect our kids from COVID," she said. "We don't need the government to tell us how to raise our children, including this school district."

She said she had personal experience with the dangers of COVID.

He told trustees attendance on the ninth day of the school year, Tuesday, was below 90%, which, if it held, would place the district below the break-even point relative to state payments based on average daily attendance.

"We feel like they (the Legislature) has to do something to make it right," he said.

Unlike last year, the state has said it won't pay for remote learning for students whose parents won't send them to school out of COVID fears, or while quarantining.

Asked after the meeting about the district's stance on requiring masks, Kelly said:

"Right now, parent choice is the model we're following now. It's too early to make a decision to put everybody in masks."

According to the DSHS Tuesday, the nine-county Trauma Service Region including Orange County showed its total available hospital beds 31% filled with COVID-19 patients. 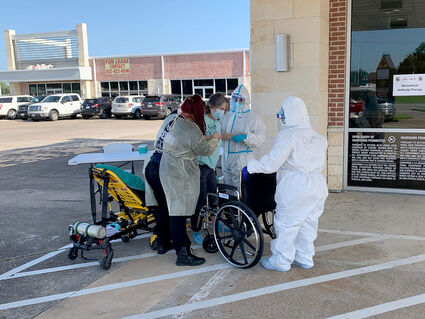 A patient is assisted from a gurney to a wheelchair upon arrival at the Regional Infusion Center in Beaumont Monday morning. The center provides outpatient infusion treatment for adults ages 12 and up.

In Beaumont Monday, the four area counties announced the opening of the infusion center at 5500 Eastex Freeway.

The goal is for doctors from throughout the four counties to send patients there for monoclonal antibody treatments that will likely keep them from getting sick enough to need to go to the hospital.

The Texas Department of Emergency Management set up the facility at a former standalone emergency clinic, staffing it with 10 nurses and a doctor.

It is open from 7 a.m. to 7 p.m. seven days a week for patients 12 and up. The establishment of the clinic is expected to increase the availability of this treatment to up to 150 patients per day, a boost of 500% to previous capacity in the region.

Patients with COVID-19 symptoms should contact their personal physician and those doctors will refer them to the clinic for treatment, if needed.

Those lacking personal doctors, may call 409-550-2536 to schedule the infusion. Press 1 for the infusion center.