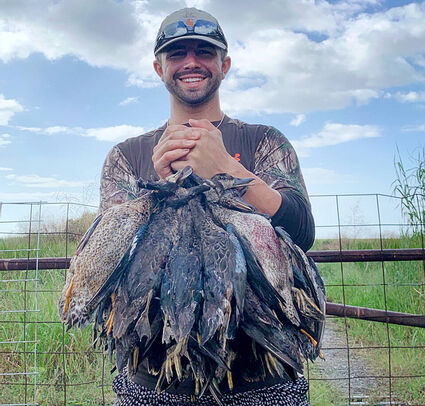 Blue winged teal have begun to show up in many areas locally. September promises to be a good one if the conditions hold up, as shown here by Hunter Uzzle from last season. RECORD PHOTO: Capt. Chuck Uzzle

It doesn't make any difference if you're a hunter or a fisherman because this time of the year has something for everyone and it's all good.

The brief cool down from near triple digit heat has both hunters and fishermen alike thinking of what's in store for the coming weeks. The very first hint of hunting season starts with teal and dove season in September and if you look at the calendar that's not too far off. Hunters of all shapes and sizes flock to the field to take advantage of the first opportunities to get back into the sport they love, the whole episode is like "big kid therapy".

The next full moon will usher in big waves of teal into our area and that trend will continue for the next couple of weeks. We just had the full moon in August and it ushered in some great numbers of birds, especially this early.

The next full moon in September will bring the really big groups of teal to our area and that conditions along the Central flyway could not be better for this time of the year as constant rains have made everything to the north of us green and fertile unlike last year. Locally our marshes are in tremendous shape as the big flush of freshwater has certainly sweetened up our marshes and promoted plenty of growth. On a recent pass through some local marshes I noticed several areas that had begun to grow a couple of different types of grass that had not been in there in a couple of years. The rich fresh water has been a blessing all the way around for everyone except the fishermen in Sabine Lake but that will hopefully change as we get closer to the fall where things in the lake should begin to get back to normal.

Speaking of normal it's been good to see the populations of shrimp starting to shop up in the marshes and bayous. I was running up Black's Bayou last week and stopped to take advantage of some gulls picking shrimp that had been pushed to the surface by a herd of small trout. The fish we caught were small but there were plenty of them and plenty of shrimp. When we get that first little cold front towards the end of September and the north wind blows all the water out of the marsh Sabine Lake will hopefully go nuts with schooling activity and the fishing will be as hot as the summer was.

I know that first front seems like a long way off so I guess we will have to pass the time by shooting a few doves as the season opens for the North and Central zones on September 1st. Several hunters I have spoken with recently have

been reporting large numbers of doves in our area which always seems to be the case before opening weekend. Historically we get a huge rain or some goofy storm come through and blows all the birds out, hopefully that's not the case this year.

The coming weeks are full of promise and the seasons will overlap causing sportsmen to make a choice to either hunt or fish, either one will certainly be a winner.