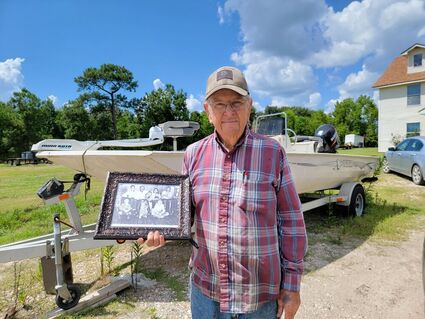 Allen Romero posed with a picture of his family in front of his boat. Romero has hunted alligators all his life, but will pass this year due to unfavorable market conditions.

Allen Romero has hunted alligators, "since I was born." His earliest memories of going on hunts with his father and grandfather were at the age of 4.

"My daddy and my grandpa hunted alligators all their life."

Romero just celebrated his 79th birthday last week and currently lives in Bridge City. That equates to a lifetime of hunting.

"My grandpa came over to Johnson's Bayou in 1924," said Romero. "My daddy was about 8 years old. Daddy was born in 1916. They lived there till 1930-31, then they moved here to Orange. It got bad over there, so they moved to Orange and went to work for the Starks."

He said they lived at the Hawk Club, a property belonging to the Starks that had two houses in back.

"The Bergerons lived in one and we lived in the other."

Romero said his grandmother died on the porch of the property.

The family moved from there back to Johnson's Bayou in the spring of 1943, six months after Romero was born.

He was brought into this world by Dr. Wayne Pierce in Orange.

Romero is the oldest of nine children. Seven of the children made it to adulthood. Romero has three siblings still alive. His two brothers still live in Johnson's Bayou, but his sister moved away.

'Gator hunting back then was a tad different than today. It wasn't regulated, there was no 'season', and they didn't 'fish' for alligators from a boat as seen on "Swamp People."

Hunting was always done during warm weather. Alligators are cold-blooded reptiles and hibernate during the winter.

Currently, hunting season for alligators in southwest Louisiana is Sept. 1-30 each year.

Romero said in the early days, they used a 14' pole with a stainless-steel hook on it. They would follow the trails left by gators when the marsh dried up and poke the stick down holes. If they found an alligator, they would hook and drag it out of the hole. Romero said the holes were about a foot and a half deep.

"To kill them, we had an axe or a hatchet," said Romero. "I can remember when I was about 10 to 12 years old, me and daddy would go hunting. He would tie that ax to my wrist and I would stand on top of that hole and when daddy would pull him out, I would hit him in the head with that hatchet."

At that time, alligators were hunted for their hides, which were used to make boots, belts, and other items.

"We'd skin them right there and roll it up," said Romero. They would stuff the hide in a backpack and go to the next hole. "Sometimes we'd hunt them at night with headlights."

"Grandpa was probably the first one that ever 'fished' a gator," said Romero. That is the preferred method used these days.

Romero said his grandfather had a big alligator he couldn't catch.

"Every time he tried to...he'd sink. So, grandpa fixed a hook and a line. He saw a place on the levee where [the alligator] would crawl up and they hooked him."

Pieces of chicken were placed on a hook, then the line was suspended from a cane pole stuck in the ground with clothespins a foot or two above the water.

"When that ole gator comes up and grabs it, he grabs hook and all," said Romero. "He swallows it, they don't chew, they swallow whole. When he swallows it, he's caught."

"And today, that's the only way they catch 'em," said Romero. They are also shot in the head today, rather than killed with an axe.,

"We don't skin them there anymore, we pull them in the boat and keep them nice and cool, so we keep water on them all the time," said Romero, because they could spoil quickly in the heat.

People discovered the meat. It became a delicacy. That required them to bring the entire 'gator to buyers, who would have refrigerated trucks waiting to receive the bounty.

"We'd put it in that refrigerated truck and they would go to a butcher shop," said Romero. "It's changed a lot."

Romero said they would also gather all the alligator eggs they could.

"We'd bring them to the alligator people and they would hatch them," he said. "They would raise them 'til they were about 4' then put 20 percent of them back in the marsh." He said the other 80 percent would be sold.

Alligators were almost depleted at one time and were placed on the endangered species list. Hunting was stopped in the 60s to give the species time to replenish itself. The regulated hunting resumed in 1972. Romero was usually allotted 100-150 tags a year, once hunting resumed.

He didn't hunt last year and will not hunt this year. The decision has nothing to do with COVID, but the fact the market is full. Currently, there is an overabundance of hides and alligator farms are providing all the meat needed, so the price paid to hunters has plummeted.

"They've raised so many of them, they can't get rid of the hides," said Romero. "They're overpopulated. They've got hides from three or four years ago they haven't sold."

At one time, alligators brought $80 a foot, according to Romero, with most gators averaging 7-8'. The biggest alligators Romero has caught through the years have been 12' plus. 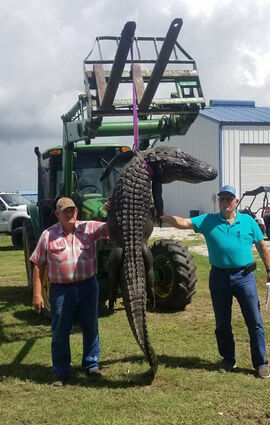 Allen Romero shot this picture of his two younger brothers, Rogerest (L) and Howard (R) with an alligator from a previous season. Romero's grandchildren now make five generations that have hunted alligators on Johnson's Bayou.

There currently is no upside for Romero to hunt. He doesn't eat alligator, so there is no need to hunt for personal consumption and he says he has all the boots, belts and such made from alligator hides he needs, because they last forever.

At the age of 79, will he return to the hunt if conditions improve?