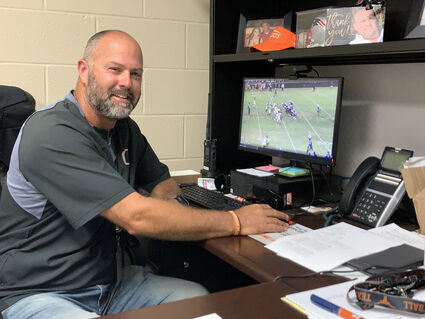 His veteran Bobcats, coming off back-to-back postseason berths, walloped Anahuac 46-13, with a veteran line leading the way for three backs to surpass 100 yards each in rushing.

“We’ve got a lot of room to improve,” Smalley said, eyeing this week’s schedule. “Woodville will be a difficult challenge.”

Preparing his team for difficult challenges has been Smalley’s challenge since he earned his first college degree at Lamar in 1999 and began his coaching career.

As the Bobcat head coach, he has led the team into the playoffs in seven of the previous nine seasons – no small feat as Orangefield typically has had the smallest enrollment among its district opponents.

“I always wanted to be a football coach,” Smalley said. “I knew from my freshman year in high school, when I had coach Richard Briggs  in world geography, that’s what I wanted to be.”

Smalley was an all-district quarterback and all-district basketball player for Bridge City, but among his most cherished memories is suiting up as a sophomore utility man for BC’s baseball team as a sophomore, when the Cards were state runnersup.

“I wasn’t too good in baseball,” he said, “but I got to suit up and practice in the Astrodome and play at the University of Texas. Just being part of it was a big deal.

“I try to tell my kids about it. Most kids now, if they don’t get the experience of playing immediately, they want to quit.”

Smalley has been an assistant coach at his high school alma mater three times, including his first two years out of college and later stints working for head coaches Claude Tarver and Cris Stump. He worked at Little Cypress-Mauriceville, then Vidor, and was offensive coordinator at Orangefield under Blake Morrison at Orangefield.

He was hired as Orangefield’s head coach before the 2012 season. He picked up a master’s degree from Stephen F. Austin State University in 2016.

“I’ve only coached inside Orange County, and I’ve never really considered leaving. I like it. I like the blue-collar work ethic of the people. It’s home,” Smalley said.

That’s through the good times and bad.

This being hurricane season, Smalley quickly remembers Hurricane Ike washing over and through most Bridge City homes in 2008, including separate ones owned by him and his future wife, Orangefield Curriculum Director Kim Smalley.

“Ike was unbelievable,” he said, “but it makes you tougher, all those life lessons. You can stay down with self-pity or get up and go to work.

“That’s one thing I love about athletics. It teaches you so many life lessons – how to work as a team, how to overcome adversity, all those things that it takes to be a successful person.”

Smalley’s Orangefield coaching staff includes two members in their 10th year working for him, Todd Trawhon and Dennis Vansa. Tim Erickson has been on the staff five years.

Chris Pachuca is in his third years as offensive coordinator while David Kendrick came over from Port Neches-Groves to fill a vacant defensive coordinator spot. Troy Sumrall, a former Nederland standout, has returned to coaching after time away and joined Smalley’s staff.

“We’ve got a good mix of guys, some who have been with me for 10 years, plus some new blood,” the coach said.

The same goes for his football team, which boasts 18 seniors.

Hunter Norwood, Coby Coulter, Cutler Hubbard and Dylan Whitman return on the offensive line and led the Bobcats to 515 yards of offense, wth just 36 coming via the pass.

Meanwhile, junior Gavin Perri-Kocci picked up 140 yards and one score on nine carries and senior Hunter Ashworth gained 108 on 17 totes and scored twice. 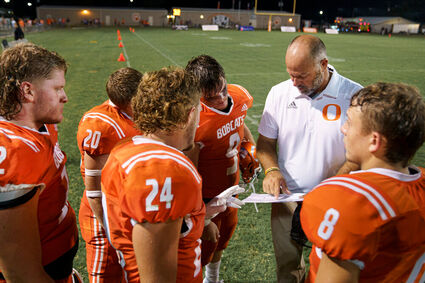 Brayden Babineaux had a team-high eight tackles and Macoy Marze added seven and cornerback Tyler Sherin was named defensive MVP for holding Anahuac’s 6-foot-3 receiver to a couple of catches.

The Bobcats, competing in Class 4A for the first time in three years, finished a hurricane and COVID-19 beset 2020 season at 3-3 in district, good enough for fourth and a playoff berth.

“People realize it gets a bit tougher when you move up,” Smalley said. “But East Chambers is no slouch in 3A.

“Last year, we won district in softball and baseball and, even moving up, our sports program had a heck of a year.