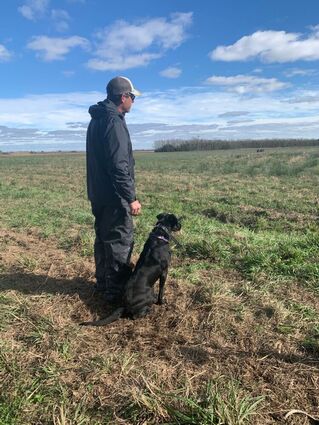 The sleek silhouette coasted over the tree line with that familiar darting flight pattern, the volley of shots only confirmed the obvious and the dove

continued on its way toward the stock tank to get a much needed drink. This scene is played out thousands of times in the state of Texas as hunters take to the field suffering the effects of a long off season without much, if any, practice. Shooting these fast flying birds is enough of a challenge without any other interference, like most dove hunters already knows there are plenty of other things to get in the way.

Without a doubt the biggest challenge for local hunters when it comes to dove season is finding real estate to hunt on. The state of Texas has plenty of public land to hunt and some of these areas hold good populations of doves if you know where to look. The only problem with public land is that you are competing with every other person who is in the same situation and those really aren't good odds. The alternative to public land is leased property, both season and day. Now if you have spent any time in the field in this part of the world the thought of leasing land for dove hunting is about as appealing as driving down the road and emptying your wallet out the window. Quality dove leases in east Texas are about as common as unicorns so when hunters find a good one they tend to guard them fiercely. The day lease option is probably the best choice for local hunters; many reputable land owners will give a fair assessment of the dove population and make choosing a field a simpler task.

Another one of the difficulties that face dove hunters is the heat; September is not a cool month in our neck of the woods. Both hunters and dogs need to go into the field prepared for some hot temperatures, and all the things that go with heat. Plenty of water is a necessity, especially for your dog because they can overheat quicker than you realize. Other nasty critters that thrive in the heat are insects such as ticks, mosquitoes and the ever popular snakes. Insect bites are one thing, snake bites are a whole different problem. If you plan on taking a dog in the field with you be prepared with a first aid kit, it could really be a lifesaver. Many south Texas hunters take the initiative to have their dogs "de-snaked" by a professional trainer. The dogs are conditioned not to pick up snakes or get near them; the training is great insurance against a possible bad

Now with all the bad things that can happen and all the things that make this hunting season tough dove season is still an enjoyable experience. Dove season signifies the beginning of the new hunting season and multitudes of Texas hunters in the North zone took advantage last weekend as they opened with fantastic results. South zone hunters hope to duplicate that stellar start in a few days as they get their turn to crank up the new season.

The thought of heading to the field for an afternoon session of dove hunting with friends is one of the most enjoyable experiences hunters can have. The fellowship and conversation that takes place in a dove field is like nowhere else. Dove hunters don't need to be overly quiet, super camoed, or even scent free because it really doesn't matter. Hunters talk freely among each other and often carry on good natured "trash talking" sessions about one another's shooting skills. The environment is completely casual and sometimes the hunt takes a back seat to the camaraderie.

Despite all the challenges that dove hunters face the sport still has a special place in many Texans hearts.

Just as a reminder do not forget to purchase your new hunting and fishing licenses for 2021-22. And yes, contrary to what the current president and his group of leftists that are currently trying to undo America think you must show your personal identification to purchase a hunting license. The same group of folks who scream "voter suppression" because they are being asked to properly identify themselves at the polls will actually have to identify themselves if they want to buy a hunting license. Now I truly doubt that many of them will partake in hunting due to the fact that they are against the 2nd amendment but that's a debate for another column. Just be sure you have your new license before you hit the field and check to be sure your gun will only hold 3 shells. Those two things cost hunters more tickets on opening day than anything and are easily avoided.