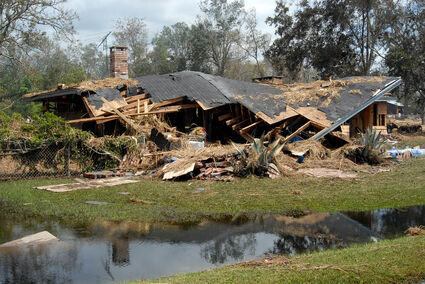 A home located on Strapper Street in Bridge City is completely destroyed by the storm surge of Hurricane Ike 13-years ago this week. RECORD File PHOTO

Kirk Roccaforte, longtime Bridge City mayor, recalls his first look at his hometown after Hurricane Ike made landfall on Sept. 13, 2008.

The mayor and other key city personnel spent the night of Sept. 12-13 in a school building in Little Cypress, away from the storm's worst but close enough to get back in a hurry.

"When I topped Cow Bayou Bridge, all I saw was water.

Jerry Jones, city manager for Bridge City since 2000, says only 16 homes were untouched by what was measured as a 13-foot storm surge.

"Texas Avenue was all water, like a big lake," Jones recalls of his trip into town after the winds died down.

Even then, a heavy dump truck was required to make it over the Cow Bayou bridge from Orange, he said.

"The water was halfway up the truck when we got to the bridge," Jones said. "We made it to City Hall, and we got some people off the roofs of their homes.

"We had no power or a really long time. Towers in the marsh twisted over. All the lines were down."

Along with Texas Avenue resembling a lake, Jones has another roadway remembrance from the wake of Ike.

"When people started gutting their houses, it was a mess," he said. "They had to take all the Sheetrock out, and people put everything on the side of the road.

"Pretty soon, there was just one path, room for one car at a time, on the roads."

A mandatory evacuation had been called on Sept. 11, but folks hurried home to start the long rescue of their homesteads.

"The citizens, No. 1, were the deciding factor," Roccaforte said. "They came back and went to work. They didn't back up.

"Our school officials got the schools back up and brought the kids back to town. That was the beginning of the recovery process.

"But in the end, it was everyone working together – the citizens, the school district, all the surrounding communities. Everybody came together."

He told The Record in years past that school officials quickly sized up what was at stake.

"Getting to a place that's normal for kids is important."

The district was ready to reopen in three weeks, though a two-day delay was required to find FEMA personnel a site besides the high school to operate out of.

Jones recalls that the city had to use bucket loaders to scrape anywhere from four inches to a foot of mud and marsh grass off the streets.

"It was so slick you couldn't drive on it," he said.

The city was able to use generators to keep its water system running before Entergy could recharge the area's power lines.

"We set up a generator at our public works plant, and most everybody in town, we were cooking for them," Jones said.

FEMA trailers eventually popped up everywhere, as residents needed a place to live when they weren't rebuilding their homes.

"We allowed them to park in driveways so people could get back and start building back.

"It was hard to get contractors to work on your home. We were in our travel trailer for a year."

Jones said the City of Bridge City hired out of town contractors from Dallas to do the repairs at City Hall, the Library and Community Center. 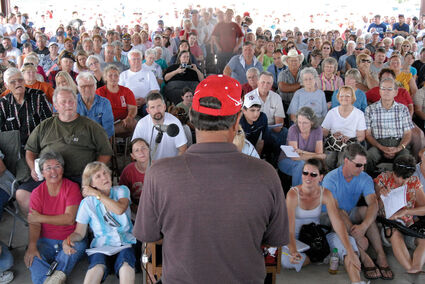 In the early morning hours of Sept. 13, 2008 the storm surge from Hurricane Ike reaches Arthur Street off of FM 408 in Bridge City. RECORD File PHOTO

While Harrison remembered a pep rally at Walmart before the Bridge City football team boarded a bus for its first post-hurricane football game as a big thing for the city, Jones remembers no big celebration for the city as a whole.

"I think by the time we got through, we were too tired to have a celebration," he said.

"We continue to have way too many disasters," he said, "but Ike was a lesson learned up-front.

"We've met some challenges much better in the recent disaster, because of what we learned getting through Ike.

"That's the only good thing I can say about it. Bridge City has recovered and flourished, and it continues to grow, even as we speak today."