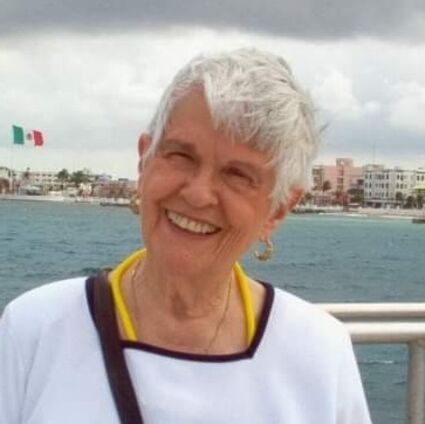 Mary Emma (McLain) Majors, 96, was born in Red River County in Texas, the daughter of the late Bert and Vada McLain.

She left this world peacefully in the early hours of August 31.

Visitation and Funeral Services were held on Saturday September 4, 2021 in the chapel of Phillips & Luckey Funeral Home in Caldwell, Texas.

Mary attended Texarkana High, where she met the man who would become her husband and the love of her life, Joe Majors, Jr. They each went on to earn degrees from The University of Texas. Mary's degree in Home Economics would come in handy as Joe pursued his Dental Degree from Baylor Dental School and in life as they began their family. They spent the biggest part of their lives in Bridge City, Texas, where they would raise their three children. The couple became a mainstay at St. Paul's Methodist Church for 49 years before relocating to the BCS area in 2006 after Hurricane Ike destroyed the family home. Later they became members of A & M United Methodist Church in College Station.

Mary and Joe lived a full life before and after retirement. They loved to travel, cruise and enjoyed square and round dancing with clubs. They were Life Masters in the American Contract League and members of duplicate bridge clubs in College Station. She was active as long as she could be with United Methodist women. Mary loved to sew, quilt, and knit. She often had a knitting project going; hats and mittens for preemie newborns, Sweaters for the Mission, and Cancer Caps for those who lost hair and would feel more beautiful with one of her pieces of art. Mary would spend her final years at Arbor Oaks Retirement community in Bryan, Tx. She enjoyed her new friends, putting puzzles together, playing chicken foot or bridge, and she likely directed anyone who got out of line! As her health declined, God seemed to bring her children back to serve her all in unique ways. Bo, the youngest, would leave the priesthood to move back to the area to serve as a licensed social worker. He was able to spend more time with his mom since his early years and spoke to her each night. He enjoyed their long talks and fondly remembered her sitting by his side as a child for all those piano lessons. Chuck, the middle son, practiced dentistry only two blocks from her until just a month ago and would take a brisk walk and have lunch with her daily during the week. He was the plumber, clock winder, and neat freak regularly cleaning out her refrigerator from Styrofoam container take over. Marcy cannot be celebrated enough for her service to her mother. She would retire and become Mary's primary caregiver when she no longer drove. She was her grocery shopper, delivery person, regular dinner guest, chief bottle washer, and drug runner! Seriously, Mary could get pretty bossy about those medications!