Teal Hunters in Texas Can Anticipate Another Good Season 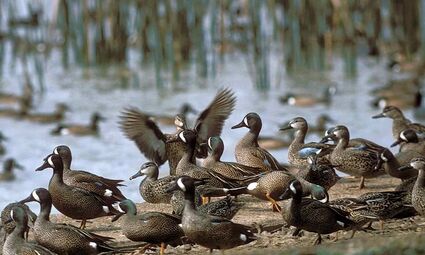 The 2021 early teal hunting season arrives this Saturday (Sept. 11) and Texas hunters can once again expect a good season. Habitat conditions across much of the state are in outstanding shape which is a great sign going into the season.

"I am expecting a good teal season once again for the state of Texas," said Kevin Kraai, Waterfowl Program Leader for the Texas Parks and Wildlife Department (TPWD). "Teal numbers are already impressive in many areas of Texas, especially the rice prairies of the Texas Gulf Coast and the playa wetlands of the Panhandle."

The 16-day statewide early teal season in Texas will run Saturday, Sept. 11 through Sunday, Sept. 26. The daily bag limit on teal is six, with a possession limit of 18.

Blue-winged teal are the second most abundant duck in North America and by far the most prevalent duck found in Texas during the special early teal season. They primarily breed in the Prairie Pothole Regions of North Dakota, South Dakota, Saskatchewan, and Alberta.

This very important region to breeding waterfowl is currently experiencing a significant drought. The lack of winter snow last year and spring/summer rains this year will result in a significant decline in surface water in this region. The result will be lower production and fewer juvenile teal coming south to Texas this fall.

However, this news shouldn't dampen the spirits of teal hunters who are gearing up for the season.

"We still have literally millions of blue-winged teal in North America," said Kraai. "Current estimates of blue-winged teal are 5.83 million, which is far above the 4.7 million bird threshold required to have a 16-day teal season for 2022-2023. So, there will be no changes next year as well."

As for conditions and prospects for teal season around the state, TPWD waterfowl biologists report:

• Blue-winged teal migration is well under way and actually a couple weeks earlier than normal considering the poor wetlands conditions in the breeding grounds.

• Teal numbers are already impressive in many areas of Texas especially the rice prairies of the Texas Gulf Coast and the playa wetlands of the Panhandle.

• Habitat conditions across much of the state are in very good shape and there is abundant shallow water and swollen reservoirs across most of Texas.

Kraai would like to remind migratory bird hunters to make sure they are Harvest Information Program certified and confirm the HIP questions are answered correctly. The surveys allow biologists to get an accurate sample of hunters so harvest surveys can be delivered to a subsample of hunters later in the year from the U.S. Fish and Wildlife Service.

Hunters should purchase their new 2021-22 Texas hunting license prior to hitting the field. In addition, teal/waterfowl hunters will also need a migratory game bird endorsement, federal duck stamp, and HIP certification. It's also required by law that hunters have proof of their completion of a hunter education course.

Teal season dates, along with regulations, bag limits and more can be found in this year's Outdoor Annual, which was made possible in part by support from Chevy Silverado. Hunters can also access digital copies of their licenses via the Outdoor Annual and My Texas Hunt Harvest apps.

Anyone hunting on Texas Public Hunting Lands are also required to purchase an Annual Public Hunting Permit. Texas has more than 1 million acres of land that is accessible to the public. More information about these lands and locations can be found on the TPWD website. Hunters using public lands can complete their on-site registration via the My Texas Hunt Harvest app.