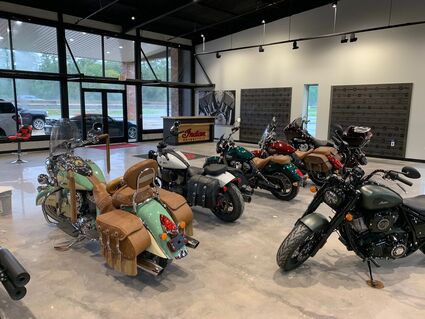 Columbanus Motor Sports, 3500 IH-10 West in Orange, is Southeast Texas' official dealer of Indian motorcycles, a brand which was founded in 1901 as America's first motorcycle. Once the largest motorcycle manufacturer in the world, the company went bankrupt in 1953 but it was restarted by Polaris a decade ago.

Big boys' toys in two-, three- and four-wheel models and power equipment to get the job done once you get where you're going.

It's all under one very big roof at the new Columbanus Motor Sports that opened Wednesday at 3500 IH-10 West in Orange. It's located at the turn from the service road that goes to the winery at Free State Cellars.

There, necessity required that much of the sales inventory was wheeled outside the store at the start of each day, then wheeled back inside overnight.

"Having everything inside on the showroom floor will be nice for people. They can come inside and see everything – even when it's raining outside."

In addition to the existing line of Honda Powersports products, Columbanus will be an official dealer for Indian Motorcycles and, beginning in October, Triumphs as well.

Vanderhall, Massimo and American Landmaster are other two-, three- and four-wheel products available in the large inventory.

The dealership also features trailers and a lawn care division, including Honda, eXmark, Spartan and Echo. Generac Power Systems, a company dating back to 1959, also has its portable generators and home backup systems at Columbanus. 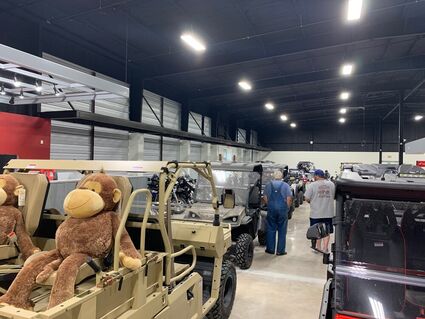 An employee, right, helps a customer looking at the wide variety of utility and all-terrain vehicles at Columbanus Motor Sports in Orange on Tuesday, Sept. 14.

Columbanus (pronounced Call-um-BONN-is) is known as the patron saint of motorcycles.

Although he lived in the sixth-century, long before motorcycles, the Irish missionary was a very early-day king of the road.

He walked across Europe to establish numerous monasteries in present-day France and Italy.

The dealership was created by Frey and partner Ed Van Huis when purchased an existing dealership in September 2019.

As employees scurried earlier this week to unpack and set up displays, McConnell pointed out one thing still lacking – a half dozen floor-to-ceiling glass garage doors that are on back-order.

"That'll really open up the place," she said.