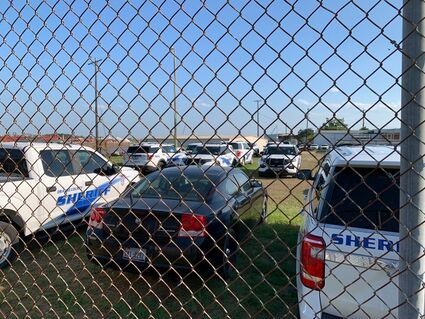 Orange County Judge John Gothia disagreed Thursday with allegations that he and Commissioner Johnny Trahan were at fault for holding private bargaining sessions aimed at a new contract for the county’s deputy sheriffs.

Gothia acknowledged Thursday that the Orange County Sheriff’s Employees Association was seeking more pay and the continuation of a “just cause” clause, which allows for arbitration in disciplinary circumstances inside the department.

He said the non-posted informal meetings that have been conducted over several months were at the request of the leadership of the deputies’ association.

And Gothia said it was the association’s leadership that kept things secret from its 100-plus members.

The Record Newspapers reported this week that on Sept. 3, Charley Wilkison, executive director of the Combined Law Enforcement Associations, accused the county and Sheriff Lane Mooney of “union-busting.” Wilkison said two grievances were filed, one alleging violation of the law by failing to conduct negotiations in open meetings.

The county and the Orange County Sheriff’s Employees Association agreed in 2019 on the most recent collective bargaining agreement that spells out deputies’ pay and working conditions.

The three sides – the county, which funds the Sheriff’s Office; and Mooney, who sets the work rules for the deputies – began meeting for a new CBA in mid-June. The county offered the first of what Gothia said have been seven versions of the contract in early August, with each version representing “one or more concessions by the county” with no give-backs from the deputies.

That timeline and quote comes from a letter from Assistant County Attorney Denise Gremillion, who is legal counsel to Commissioners Court, to Lance Bradley. His Port Neches law firm is representing CLEAT and the deputies.

Wilkison shared copies of the grievances and correspondence between the deputies and county officials with The Record.

The Record, in turn, shared them with Gothia, after he said Tuesday he had not seen the Sept. 1 and Sept. 3 grievances signed by Dustin Bock, president of the OCSEA.

Under Texas law, negotiations between local governments and their law enforcement associations are declared to be at an “impasse” after 60 days if the sides can’t agree in writing to a contract. In the 2019 CBA it was stipulated that upon impasse, a Citizen Review Board would be called on to settle any disputes.

Tuesday marked the second week in a row Commissioners Court voted to grant a deputies’ request for an extension to review and approve the county’s latest offers.

Commissioners agreed to a 15-day extension that would give deputies until Sept. 22 to finalize the deal. Gothia said on Thursday deputies have asked for another week’s extention.

Commissioners suggested three dates next week for public meetings with the OCSEA, but Gothia said Thursday nothing had been agreed upon.

Gothia said he originally hoped to have the contract approved by all three sides on Sept. 7, in order to settle on deputies’ salaries for the 2022 county budget. It was scheduled to be presented at the Sept. 14 meeting of commissioners court.

The Sept. 3 grievance, signed by Bock, says the county “chose to force” three closed-door meetings, during which Gothia told the association’s board “what he would and would not accept.”

The grievance said Gothia presented on Aug. 11 “a take-it-or-leave-it” agreement drafted by the county “that guts the previous CBA of all employment and due process protections.”

The document further says the association was left “without the option for negotiations or deliberations in front of the public in an open meeting as required by law.”

“The implication is that we’re doing some underhanded stuff, but that’s a total misrepresentation of what’s going on,” Gothia said Thursday in reaction to this week’s Record story quoting allegations made by Bock in the deputies’ grievances.

“They’re the ones who requested the meetings. Up until a week and a half ago, we were working with their board at their request. They requested informal meetings. That what we did.”

The OCSEA has had several recent shakeups in its leadership.

CLEAT only began working for the deputies in late August and the Austin-based group that claims 26,000 members in 100 local law enforcement agencies named Stephen Townsend of Port Neches’ Bradley Law Firm as its Orange County rep.

“It was never a secretive closed-door anything,” Gothia said.

The judge said the first group of association board members they met with told them, "‘We’re trying to do this without attorneys,’ so from that time on Mrs. Gremillion did not participate.”

Gothia also took exception to a charge by Bock that Gothia “continuously contacted individual association members hounding them to rush a vote.”

“It’s not true that I was calling people,” the judge said. “They called me.”

Former Sheriff Keith Merritt refused to bargain with the deputies in past years because they refused to give up the “just cause” clause. He argued he should be free to hire and fire employees at will.

Mooney was named in both grievances, one on Sept. 1 for ending the county’s long-standing policy to allow deputies to take their patrol vehicles home. Bock alleged in his notice of grievance addressed to the Sheriff, Gothia and Gremillion that Mooney had indicated he would reinstate the benefit if the deputies accepted the county’s proposals.

In the Sept. 3 grievance, Mooney and his command staff are alleged to have threatened deputies’ jobs if they sign a grievance, and prohibit off-duty jobs and shorten their work week, all of which would negatively impact their finances.

Contacted Thursday, Mooney said he would address the allegations in due time.