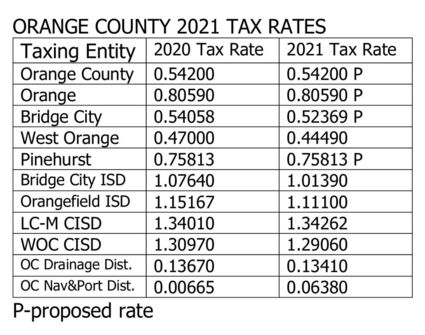 Orange County taxpayers receiving their 2021 property tax bills next month will like that this year's tax rates are staying the same or even being reduced.

They'd hate to think how much their tax payments would have gone up otherwise.

Oh, those tax payments will be going up.

Because of a lofty 13% rise in property valuations across the county, the owner of an average homestead will see their taxes rise about $200 per year.

The City of Orange was going to be one of the last entities in the county to approve its tax rate – the same 80.59 cents/$100 value it based its budget on last year – but Tropical Storm Nicholas postponed Tuesday morning's scheduled meeting until next week.

While the city tax rate should remain the same as proposed, if it does, the owner of an average homestead in the city will pay $74.63 more in city taxes than was the case for 2020.

And add on another $40-something for the average Orange County homeowner after Commissioners Court agreed to keep the same 54.2 cents/$100 rate it has collected since 2017.

If that home is in the Orangefield school district, you can tack on another $75 to $100.

The average owner of a homestead in Orangefield ISD is due to pay $98.12 more in school taxes for 2021.

Pinehurst was a municipality that kept its tax rate the same, 75.81 cents/$100, which translates to $49.57 more to pay for that average homesteader.