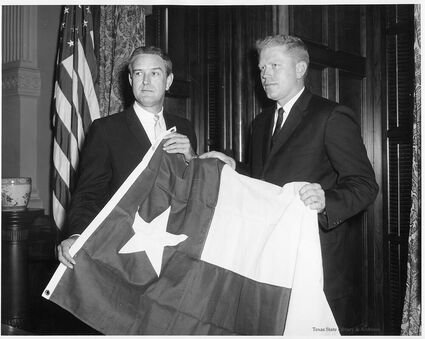 Connally stayed in office through two, two-year terms and was the first governor to serve a four-year term.

Connally's second run for governor was again opposed by Yarborough. I had supported Yarborough in his initial race but the more I listened to some of his ideas, it became apparent to me that Yarborough was long on oratory, but short on knowledge of government. Yarborough was at a disadvantage financially. Connally had millions with which to support his gubernatorial campaign while Yarborough would raise his at-large gatherings of supporters, appealing to his money followers much the way a tent evangelist would appeal to his flock for contributions. The second was not nearly as close as the first, Connally winning by a very comfortable margin.

During his second term, and my second term, I became closer to not only Connally but to the speaker of the House, Ben Barnes, who became speaker after Connally appointed Speaker Tunnell to the Railroad Commission. Barnes was in his 20s and was touted as the wonder boy of politics having been elected to such a powerful office well before he was 30 years old. During that second term I was successful in several requests of Connally, including one in which I led a delegation to convince Connally to cure a gross injustice in the Texas Department of Public Safety. At the time, there was not a single Black highway patrolman in uniform for the Texas Highway Patrol. Connally, listened to our recommendation and within 30 days thereafter saw that two men of color were appointed to our Department of Public Safety.

The change of speakership was also beneficial to me; unlike Tunnell, I received fair treatment in committee assignments and consideration of various bills that I had introduced. My relationship with Barnes continued on after Barnes was elected lieutenant governor. The most notable benefit from my closer relationship with Barnes occurred when the bill that I sponsored to create Lamar State College-Orange was stuck in the Senate. Barnes intervened with key members of the Senate, thereby allowing us to pass, and create Lamar-Port Arthur and Lamar-Orange.

Connally went on to serve but later shed his Democratic leanings joining the Nixon Administration. U.S. Senator Ralph Yarborough likened Connally's defection of joining the Republican president to a rat swimming to a sinking ship.