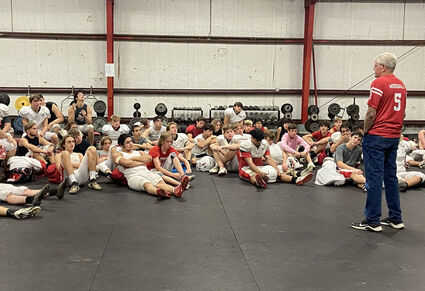 In fact, he's waking up the heroes of the Cardinals' Glory Days and having them visit with current BC football players at 7:30 a.m. on Mondays.

"It's just important to get the young guys with the guys who've been there and won state," McGuire, Bridge City's first-year coach, said. "For kids who have heard about that state championship team all their lives, it's good for them to meet those guys and know they care about them."

The visitors are members of the school's Class 3A state football championship team in 1966. And 7:30 in the morning is hardly early for McGuire's players.

Among the 1966 players speaking to the 2021 players so far have been Charles Miller, Jerry Jaynes, Darrell Segura and longtime Bridge City coach and administrator Troy Woodall, who was an assistant to Coach Chief Wilson.

The 1966 Redbirds, state runnersup in 1965 when they fell to Brownwood in the championship game, defeated McKinney for all the marbles in a 13-1 1966 campaign.

They were led by running back Steve Worster, a three-time all-stater and three-time All-Southwest Conference pick who led the University of Texas to two national championships.

Jaynes, the fullback who led the blocking for Worster at Bridge City, was the team's second-best player, said Segura, who was a second-team running back.

The U.S. Military Academy at West Point is where Jaynes played college football.

"The players, they like it," McGuire said. "These are older gentlemen who won it and went on to do great things in their lives.

"And they're from Bridge City. This shows our players what they can accomplish, that football is not the end all, be all, but a tool that can help you do great things in life."

McGuire, a West Texan from Crane, was an All-Big 12 lineman at Texas Tech and spent the 2019 and 2020 seasons as an assistant coach at Austin Westlake.

He recalls that as the team prepared to kick off the 2019 championship game, the players received an alumni message, from New Orleans Saints quarterback Drew Brees.

After Bridge City's football team won only one game in a 2020 season ripped by hurricanes and COVID-19 restrictions, McGuire's Cardinals are off to a 2-2 start heading into Friday's District 11-4A-II opener at Hamshire-Fannett.

"The kids are continuing to work, do their best," the coach said.