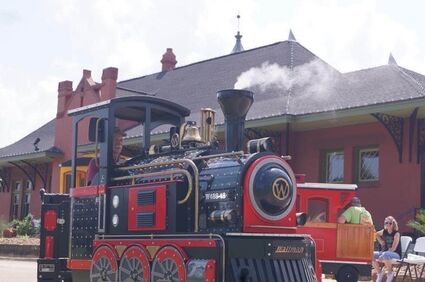 After being sidelined for a year and a half, first by the pandemic, then weather, the Depot Day midway will open for family fun Saturday at the Orange Train Depot Museum, 1210 Green Avenue in Orange.

The community is invited and entry is free. Due to a generous donation by DOW, during their 75th Anniversary celebration even the train rides and attractions are free. Attractions include a kiddie train, bouncy house, petting zoo, balloon artist and pony rides. Musical entertainment will be provided by the Orange Community Players and dancing by the Orange Blossom line dancers.

"We expect hundreds of area families to come and enjoy the festivities, rides, entertainment, vendors, and food," Said Woliver. "Funds raised through sponsorships and donations will help us continue to maintain and preserve the Depot for the community.  Our plans are to continue to add to our museum to show what an integral part the Southern Pacific Depot played in the history of Orange."

A brand-new addition to the depot is the G gauge Southern Pacific model railroad, which runs around a specially made track on the reception room wall, above the windows. The model train has been an exhibit in the planning stages from the beginning of the museum project. Volunteers George Bohn and Benny Rhodes, local model railroaders, oversaw acquiring the train and getting the track, which was donated, mounted. They have also been responsible for acquiring temporary model railroad exhibits for depot events throughout the years.

Originally, when the Orange Train Depot was purchased for restoration by the Friends of the Orange Depot, the plan was to restore the building and use it as a museum for the railroad and other industries native to Orange. What was unforeseen was the popularity the train depot would instantly receive as an event venue. In fact, the first budget with estimated income rental for the year was only $1,000. The moment rental opportunities became available, the train depot became a hot commodity in the community. The museum committee had to alter plans for the way exhibits would be displayed to not disrupt the vital revenue stream yet hold true to the initial vision.

Tours will be conducted inside the depot by Carrie Woliver and Carol Sims from noon – 2 p.m.

"Families can learn about how we restored the building, what exhibits we have, and enjoy the newly constructed SP model train which is running around the walls in the reception room," said Woliver. "In the large room, a number of Orange vendors will be displaying their wares."

"In celebration of the 75th anniversary of DOW, all the expenses of Depot Day were underwritten. Many thanks to all of our sponsors this year," said Woliver.

"Currently, masks are encouraged for the unvaccinated inside the depot," said Woliver. "During Depot Day, masks are not required outdoors."

Parking will be available on the side streets as well as on the lot by Elm and 10th Street. Information can be obtained by calling Co-chairman Rose Simar at 409-330-1576. Visit the website http://www.orangetxdepot.org. Rental information can also be found on the website.