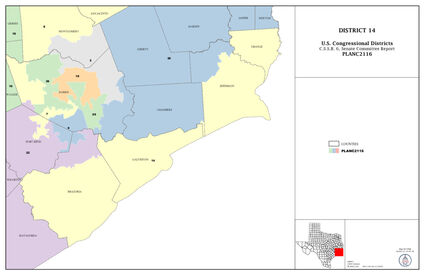 Orange County will get a new representative in Congress, barring a huge shift in a redistricting plan put forth by a committee of Texas lawmakers.

Under the plan, which still must be passed by the full Texas Legislature and signed by the governor, U.S. Rep. Randy Weber’s 14th District would include Orange County instead of the county being a part of Texas House District 36, represented by U.S. Rep. Brian Babin.

Since 1842, Congress requires every state to draw single member districts for the U.S. House of Representatives and to redraw them after every 10-year census. Thirty years later, Congress declared each district should represent the same number of residents “as nearly as practicable.”

Because Texas has added more than 4 million residents since 2010, the state has been apportioned two extra House seats and districts (from 36 to 38), each to contain about 760,000 people.

Babin, a Woodville dentist who was elected to Congress on his third try, has represented Orange County and District 36 since election in 2014.

While losing Orange County, Babin’s District 36 will pick up the northern half of Beaumont in Jefferson County and the Harris County portion of Baytown.

“Ever since Charlie Wilson left, they’ve tried to bust up this district.”

“I was comfortable with what we had” after Wilson, Thibodeaux said, “but a lot of people weren’t.

“The history of Charlie Wilson was kind of like the history of Carl Parker, [state senator from Port Arthur]. Those guys were political gurus. “They were very good leaders. They got the respect from both parties.”

Wilson was a native of Lufkin but represented Beaumont and Orange County in Congress. Over the past 30 to 40 years, district lines have often been drawn that included both Beaumont and Orange and suburbs north and east of Houston more than 100 miles away.

Not that a good representative has to live in your neighborhood.

“Kevin Brady, he did a lot for us,” Thibodeaux said of The Woodlands-based 25-year Congressman who represented Orange when it was part of the 8th District from 2003 to 2012.

“Brady was walking with me on Second and Third Streets in Orange every day after Hurricane Rita [in 2005]. He was a Republican but he worked with Democrats really well.” 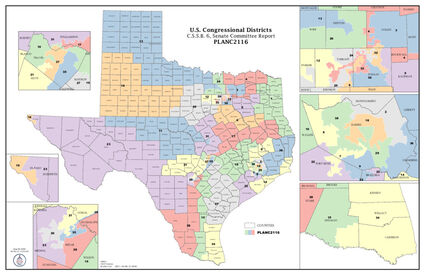 “We are better situated to be like the rural counties of Hardin County and Liberty County,” he said. “This Congressional map is drawn because they think we’re a port community like Jefferson and Galveston but our port is small.”

Covey has a new political job, representing the state Republican Party in this district.

And he has real concern that Orange County’s needs might get less attention under a new map.

“We’ll be small fish now, were before [in District 36] we were the biggest. I think size helps in that we have more primary voters and candidates are more likely to spend time down here.

“But move us to Randy Weber’s district and we’re not as important.”