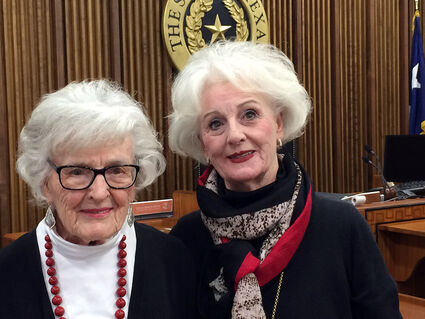 Gloria Marcelle Adams has had "a good life," though the last few weeks have not been what she planned. Since around Labor Day she has been in a rehab facility after a fall broke her hip. She fell in the garage, but luckily, she was discovered by her daughter she lovingly calls "Teesey," after only 30 minutes.

"I'll be home for my birthday," she said excitedly. She turns 98 next week on Monday.

Planning to go overseas as an adult, she needed a passport and discovered there was no record of her birth, no birth certificate. The doctor from a nearby town that came to her parents' home to deliver her never bothered to register her birth. That happened a lot back then. Home births were common and you didn't have to have a birth certificate for everything, such as to get a driver's license, so many didn't discover they were missing that important document until later in life.

A neighbor helped her get the documents she needed. Usually, it requires someone that has known you all your life to attest to who you are.

Adams said she was a tomboy growing up in the country.

"I could climb the highest tree," she said. She also loved to sew. "I liked to make doll clothes."

In school math and homemaking were her favorite classes. "That's where I learned to cook." Adams said her favorite thing to make were pies and cakes.

When she graduated from Shelbyville High School, school only had 11 grades.

She went to work at Dupont as a lab tech until retirement. Adams said if DuPont hadn't have hired her, she would have gone to college at Lamar.

She also has a fondness for flowers. Adams said she and her late husband "Al" loved to garden. "All my life I've raised flowers. We planted sweet peas every spring," she said. They also planted lots of roses. "At one time we had over 200 bushes."

Al also raised vegetables. Adams said she bought a canner from Farmers Mercantile the year she retired from DuPont and started canning his vegetables.

She and Albert Leon Adams Jr. were married for 57 years before he passed 22 years ago.

Adams made local history as the first female commissioner in Orange County 1987-94 for Precinct 2.

"I liked helping the people. I liked helping to run the county," she said. "You know how we always think we can do it better than other people? Well, I wasn't any different."

Today her only child, Theresa Beauchamp is carrying on the tradition as the current county commissioner of Precinct 2.

"There are several fathers and sons in the state that have held office, but we aren't aware of any other mother and daughter," said Beauchamp. "There could be, but we haven't heard of it. There weren't many women in politics back then."

These days, before the fall, Adams spent her days at church and playing bridge. She can't wait to get back to it, but there will be one difference. Now, she will need to catch a ride. About a week before her fall, she totaled her car in an accident with another driver that was 92.

"I pulled out in front of another car," she said. Luckily, neither of them was injured, but Adams has decided it is time to hang up the keys.

"God sent me a message," she said. "That was the deciding factor. My driving days are over. My life is about to be different," she said, referring to the need to rely on others to get around. "I've been blessed. I'm a real Christian too. I love God above all."

She will continue to go to church and Sunday school at Trinity Baptist Church, where she is a charter member and play bridge at least twice a week.

She can't wait to get her Maltese named Noel back home with her. "I miss her so much.

Will there be cake next week for her birthday?

"I don't know," she said. "I'm not making it, you'll have to ask Teesey, but I'll be home for my birthday. Tell everybody I'm headed that way."