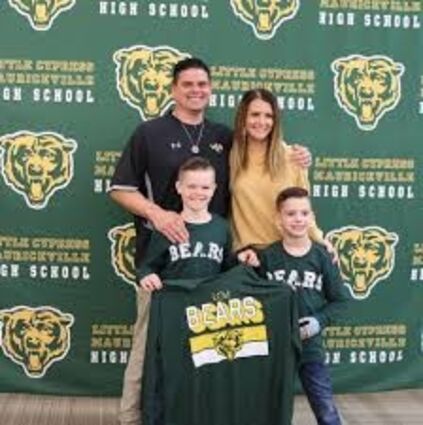 Little Cypress-Mauriceville's football team is sitting pretty as it enters District 10-4A Division I play this week.

After slogging past Jasper 13-0 last week, Coach Eric Peevey has his first Battlin' Bears squad off to a 4-1 start.

That's three wins more than LC-M garnered last year in a season affected by storms and the coronavirus pandemic.

"The thing about sports is you can have an incredible preseason, but it can go down fast," Peevey said.

The six 10-4A-I teams went a combined 29-5 against predistrict opponents this season.

"Our whole district is off to a great start, so it's going to be a battle each week," the coach said.

A road trip to take on defending district champion Huffman Hargraves is first on the 10-4A-I menu for the Bears.

"They've got a good team and a lot of people back," Peevey said.

But the Bears have been no slackers.

"The kids are really working hard right now, having some good practices," Peevey said. "We felt we had a really good preseason, finished 4-1.

"That's definitely in a spot a lot of people wouldn't have picked for us."

The Bears have outscored opponents 140-71 for the season, with the majority of points allowed coming in a second-week 39-20 road loss to West Orange-Stark.

Morris has rushed for 597 yards and eight scores and is the team's leading receiver with 11 catches for 181 yards and three TDs. Last week, receiver Dean Reynolds scored both touchdowns on pass receptions.

Peevey, an Orangefield High grad who coached West Brook to the state title game in 2018, brought a lot of the Bruins' playbook to LCM.

"My offensive coordinator, Jeff Breaux, came with me from West Brook, and calls the plays," Peevey said.

"We installed the same system. We feel like Ashton fits the system. Each week, we add new things and Ashton's learning each week.

"What you see on film from us might not be what you get from us, because we're still not through installing our offense."

Peevey admits he's been spoiled by having the depth of a Class 6A program at West Brook.

"The big difference is numbers," he said. "I'm used to dealing with about 250, 260 players on five teams at West Brook, playing complete two-platoon and having multiple backups.

"Here, some players have to play both ways, so we have to adjust practice time, so they can be on both sides of the ball. But every week, we learn our kids more and fewer players are having to go both ways."

The players have had to adjust, too.

"Every day we spend 30-45 minutes watching film and installing our game plan. We also lift every day, so that's about an hour we have to take aside before or after school," the coach said.

"So our days are a little longer but kids have bought in and understand you have to do those things to be great."