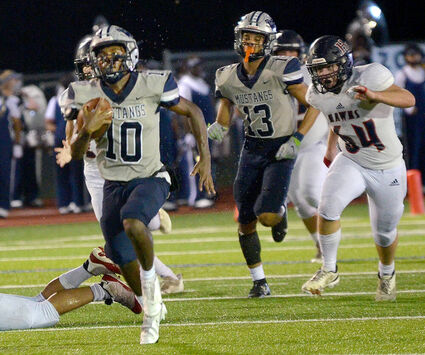 Some local football teams have already been facing the heat of district battle for a couple of weeks now, while others begin district play this Friday night. Regardless of the situation, all teams have their collective sights set on a victory this Friday and a trip to the playoffs in November.

The West Orange-Stark Mustangs (4-1) are doing what they do well and that is use a stubborn, punishing defense to hold opposing offenses in check and an offense determined to put points on the board at every opportunity. Elijah Gales had approximately 130 yards rushing this past Friday as the Mustangs ran over the Hardin-Jefferson Hawks. The defense has limited its last two opponents to a total of 15 points, all of which came late in the games.

The Mustangs will face a bit tougher test this week as the Silsbee Tigers arrive in West Orange for the third district match of the season in District 11-4A Division II. These Tigers (2-3) have lost all three games by a total of 12 points, so they keep games close and within striking distance for its offense which averages 29.2 points per game.

The Orangefield Bobcats (4-1) look to continue its winning ways as the Bobcats hit the road to clash with the Liberty Panthers (4-2) this Friday night.

The Bobcats offense is led by quarterback Brayden Parker and powered by running backs Cameron Dischler and Hunter Ashworth and is averaging 30.2 points per game. The defense has been equally impressive allowing a mere 13 points per game, the best in District 11-4A. The question will be whether the Bobcats offense can overcome an equally stingy Liberty defense, which has allowed only 13.2 points per game. Orangefield and Liberty have a common opponent in Silsbee, which the Bobcats defeated 16-14 and the Panthers lost to by a score of 20-7.

Bridge City is hoping to get back on the winning track this Friday night as the Cardinals host the Hardin-Jefferson Hawks for homecoming. The Cardinals (2-3) are on a three-game losing skid, but this will be the week to get back in the district race as the Hardin-Jefferson (1-4) offense averages a meager 10.4 points per game this season, while allowing 30 points per game defensively, both of which rank last in the district.

Although Cardinals quarterback Ethan Ocegeura has battled some injuries in previous weeks, as he goes the Bridge City offense will go too. This is a young team, so they may take some lumps this year but that will provide plenty of experience for next season.

District 10-4A Division I heats up this week as all six team begin district play. The Little Cypress-Mauriceville Bears (4-1) might be the surprise team of the season as the Bears have already quadrupled their win total from 2020.

Whether it has been high-octane offensive outpouring like the 49-20 win over Houston Kincaid or the 13-0 slugfest victory over Jasper this past Friday night, quarterback Ashton Landry and running back Da'Marion Morris are a dual threat on offense which no opponent should overlook.

All six teams in District 10-4A Div. II have winning records and an overall record of 24-5 through six weeks of play. The Bears are facing the preseason district favorite Huffman Hargrave Falcons (5-0) this week in Huffman and it should be a hard-hitting contest between to juggernaut teams.

The Falcons are averaging 36.6 points per game for the season, second best in the district, while only allowing a stunning 5.8 points per game. This includes two shutouts and limiting Bridge City to a safety, which is more on the offense than defense. 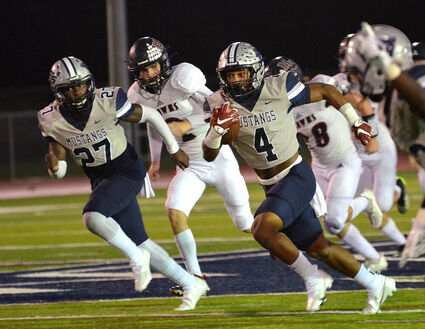 Mustang Elijah Gales heads to the end zone in the 54-7 romping of the Hardin Jefferson Hawks. Gales finished the game with 130 yards on 6 carries, a rushing touchdown and a 60 yard punt return for a score.

The Vidor Pirates (4-0) head into district this week with a road trip to Splendora to take on the Wildcats (4-1) to open District 10-4A Div. II play. The Pirates offense, which is led by quarterback Eli Simmons and running backs Weston Sepulvado and Layne Wilhelm, has averaged 30.5 points per game this season and can hold its own in a shootout or a defensive battle as was evident by the Pirates 8-7 victory over Jasper two weeks ago when Vidor scored with 30 seconds remaining in the game and converted the two point conversion.

The Pirates defense, led by Jordan Smith, will face the high-powered Splendora offense which is averaging a district-best 37 points per game. The Wildcats defense has been impressive as well limiting opponents to just 19 points per game. If Vidor can continue to limit turnovers and control the clock with its ground-and-pound offense, then the Pirates have a good chance to make a mark in district play this year.