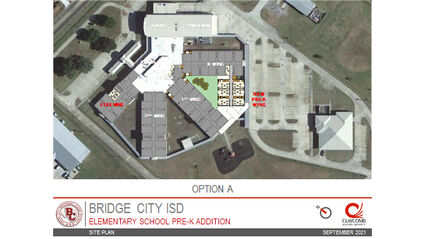 An addition of a Pre-K wing at Bridge City Elementary School, right, would include six much-needed classrooms and cost about $5 million, according to Dr. Mike Kelly, schools superintendent.

To make sure the schools have room for them, Dr. Mike Kelly is proposing a building program that will not require any new tax dollars.

"None of these projects have anything to do with new taxes," Dr. Mike Kelly says. "They would all be paid for out of our fund balance."

Kelly held a community meeting on Oct. 6 to explain his plans. About 30 non-school folks showed up, he said. Many of them left not understanding his vision, he said.

So the superintendent will hold another meeting at 6 p.m. Wednesday, Oct. 27. The meeting site is TBA.

"I will do as many community meetings as it takes for people to understand the facts of what Bridge City ISD is going through," Kelly said.

"My hopes are that people will see that we're transparent, don't have anything to hide.

Here are some facts:

The same study reminds that as many as 17,000 construction workers at once could be in the area for a few years if the proposed Chevron Phillips Chemical and Entergy power plant projects both land in Orange County.

"That's mind-blowing to me," Kelly says.

He's aware that not all of those workers will bring children to the BCISD.

"We're going to get a lot of kids out of these expansions. We think we have an incredible school district and this is where people want their kids to go to school."

BCISD is ace-ing it in financial stewardship and academics, Kelly says.

The district was awarded a FIRST rating of "A", scoring 100 out of 100 points for financial accountability.

"Right where you want to be," Kelly said.

Although the state did not award accountability grades for districts based on their students' performance on the STAAR test last spring, because the COVID-19 pandemic prevented testing in the spring of 2020, Kelly says BCISD individual STAAR scores in 2021 were equal to those in 2019.

BCISD has lowered its tax rate for 11 years straight.

The school district has a fund balance – sometimes called emergency funds – of $18 million, enough to pay for eight months of operation beyond what it normally takes in from property taxes and state and federal funds.

"Best practices say you should have enough money set aside to operate for 90 to 100 days, in case of an emergency," Kelly said.

Kelly's first goal is to replace temporary buildings at the Elementary School campus by building a new pre-kindergarten wing with six new classrooms. That will cost about $5 million, he reckons.

BCISD has a popular career and technical education program that has outgrown its scattered classrooms and needs a new home, all under one roof.

This is a problem, since the only space available on the landlocked high school campus is used as athletic practice fields.

The solution, Kelly says, is to install artificial turf at Larry Ward Stadium. That way, athletic teams always have a place to practice, regardless of the weather.

And, he says, BC's tennis courts and track are unsafe and need to be replaced. Cost for fixing up the athletic facility would be $3 million, he said.

The superintendent didn't offer a price tag for a CTE building but mentioned construction would be impossible until the football stadium turf project was finished.

"The cracks on the tennis court are so big the maintenance crew uses a weedeater on them," Kelly said. "And our track has holes and is dangerous.

"It makes no sense to have the track replaced and not have football redone."