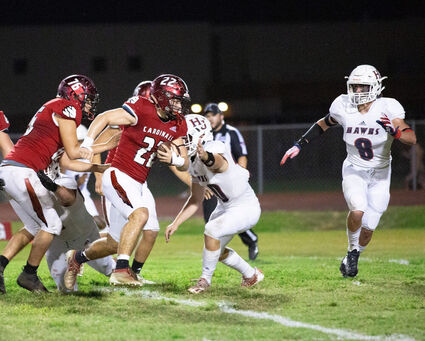 Teams are positioning themselves for a run at district titles and the playoffs, and games this week will go a long way in helping resolve those questions with two huge matchups featuring four Orange County teams. To show how successful the 2021 football season has been thus far, all five Orange County teams have a combined record of 23-6 through seven weeks.

The Mustangs pummeled the Silsbee Tigers (2-4, 1-2) by a score of 45-20 this past Friday night. The Mustangs offense may have started slow, but it was full speed ahead for running back Elijah Gales and the WO-S offense from that point on. The Mustangs churned out nearly 400 yards of offense with Gales getting more than 100 yards rushing and he added a touchdown pass as well. The defense continued to limit opposing offenses by creating turnovers. Orangefield traveled to Liberty (4-3, 1-2) on Friday and came away with a 34-13 victory over the Panthers. The Bobcats have a knack for big plays and the offense set the tone early with a 70-yard touchdown run by Cameron Dischler. The Orangefield ground game is in fine mid-season form as both Dischler and Hunter Ashworth broke the century mark in rushing against Liberty. However, rushing against WO-S will be a whole different task.

The main event for District 10-4A Division I this week will featuring the Little Cypress-Mauriceville Battlin' Bears (5-1, 1-0) hosting the Vidor Pirates (5-0, 1-0) on Friday night.

The Bears traveled to Huffman this past Friday night and defeated the previously No. 5 ranked Hargrave Falcons, 39-31. LC-M jumped out to a 12-0 lead, but the Falcons (5-1, 0-1) responded and lead 21-12 at the half. This Bears team used a strong second-half showing to surge passed the Falcons for the 39-31 victory. Quarterback Ashton Landry has the ball in his hands every play and is a threat to any opposing defense, whether running or throwing. He did both well against Huffman and accounted for four total touchdowns for the game. Amier Washington and the Bears defense are on the rise and have been able to keep nearly every offense in check this season. The Vidor Pirates (5-0, 1-0) defeated the Splendora Wildcats 30-20 on Friday night. The Pirates offense struggled in the first half and the score was deadlocked 7-7 until the Vidor defense provided a spark with a safety and a 9-7 lead. The defense then held the Splendora (4-2, 0-1) offense, the highest scoring offense in the district, to its lowest point output of the season. The winner of this week's game will be sitting in prime position as district contests hit the home stretch for the final three weeks. 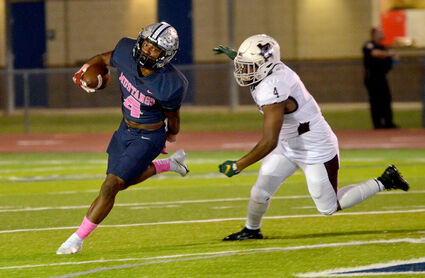 Mustang Elijah Gales is quickly approaching the all time leading rusher for WO-S Gales has a little over 300 yards to break Coach DePauldrick Garrett's record. He had 113 yards on 13 carries, 66 receiving yards and threw a 61 yard option pass to Jailen Brown for a touchdown.

Bridge City (3-3, 1-1) got a thrilling 21-20 homecoming win this past Friday over the Hardin-Jefferson Hawks with a late defensive stop on the Hawks go-ahead two-point conversion. The Cardinals had two touchdowns called back because of penalties, so the game was much closer than it should have been. Quarterback Ethan Ocegeura managed the game and offense well, as running back Kyler Garlaska sliced and diced through the Hawks defense for more than 120 yards, while linebacker Harrison Gauthier came up with two big take-aways for the Cardinals defense. Bridge City will be on the road this week to face the Silsbee Tigers in a pivotal game in District 11-4A Div. II. If the Cardinals can eliminate the inopportune penalties they suffered against H-J, then this game could go the way Big Red needs.