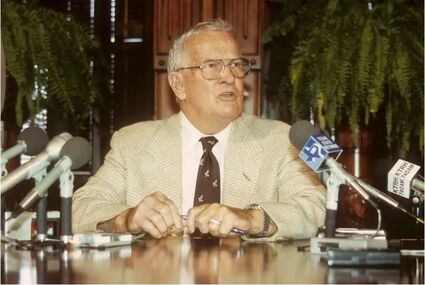 William (Bill) Clements was elected after Dolph Briscoe. Clements defeated a former attorney general for Texas, John Hill, who was a prominent trial lawyer prior to being elected attorney general. Clements' defeat of Hill gave Texas its first Republican governor since the post-Civil War era. I strongly supported Hill and urged him to run a very aggressive campaign. Hill ran as though he were already elected governor with the belief that Democrats had controlled Texas for so long that having won the Democratic primary, he would be a shoo' in to election for governor. When I urged him to send word to his strong supporters that the race was close, he ignored my advice, telling me his strategy of acting as though he had already been selected would cut off funding for his opponent Bill Clements. I informed him that Clements didn't need to raise money because he was a multi-millionaire in his own right and could fund his own campaign. Unfortunately for Democrats, Hill was wrong and I was right. Clements' surprise victory led to the first inroads in the Republican takeover of state government.

Clements and I had numerous differences; many of them having to do with appointments in Southeast Texas. We had many disagreements about who should be appointed to serve on the Lamar Board of Regents. Eventually, after a face-to-face meeting in Clements' office in which I reminded him that he would make no such appointments without consultation with me. (The Constitution provides for consultation with the senator from the district the appointment is being made.) we arrived at a compromise and appointed a very favorable group of gentlemen from Southeast Texas to serve on the Board of Regents. Among them was a prominent Orange County resident, Bob Montagne for whom the Montagne Center in Beaumont is named.

Clements was also well known for his partisan use of vetoes. I fell victim to several vetoes of legislation I carried under Clements' administration. One most memorable was that Clements, with no good reason, vetoed all the funds for the oil museum in Beaumont. One of the memorable photographs I have in my collection from my days in the Senate occurred following my tenure of one day as governor of Texas. Traditionally, the president pro tempore of the Senate serves a day or two as governor by agreement when the governor and lieutenant governor absent themselves from the state of Texas. The day following my governor for a day, several of my friends hosted a celebratory breakfast. As I entered the room, there was a large banner over the door, saying, "Gee, I miss Governor Parker." Not only did they have the banner, but the favors at the breakfast were bumper strips saying, "Gee, I miss Governor Parker." Later in the week, I could not resist taking one of the bumper strips to Clements while he was visiting the Senate. The photograph I have is the startled look on Clements' face as I was showing him the bumper strip as he was seated on the podium in the Senate chamber. Clements is the only governor, so far in Texas who was elected, defeated and then re-elected. He was defeated by Governor White, but after White's first term, defeated White to return as governor of Texas.