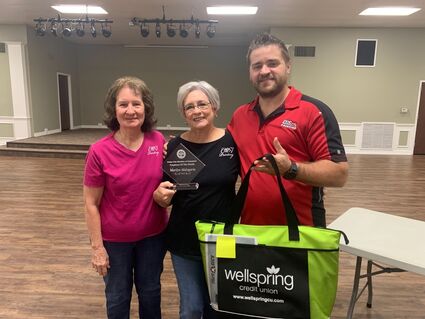 The Bridge City Chamber of Commerce has announced that Marilyn Malagarie, Employee of COS Printing, has been named October Employee of the Month. Marilyn was presented her award, sponsored by Energy Country Ford, by Ambassador and COS Printing Owner, Eric Andrus at the October Networking Coffee hosted by Re/Max-Candace Mulhollan Group.

Marilyn was nominated by Eric Andrus who said, Mrs. Malagarie worked for Central Office Supply off and on for over 20 years. First started working for Eric's (current owner) grandfather in the early 80's and has been in this business since. She is essential to COS Printing and operations. She works in the bindery and post press operations. She is such as wonderful person to work with. I can always rely on her workmanship when she is in the press room and know it will be right.