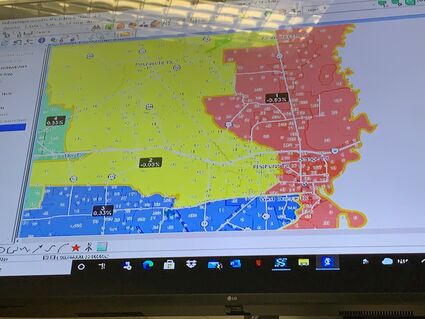 A proposed new map for Orange County Precincts 1 (red), 2 (yellow), 3 (blue) and 4 (green) is projected on an overhead monitor Thursday, Oct. 14 at the Commissioners Courtroom in downtown Orange.

Donors ear-marking their funds for the March 2022 Republican Primary election in Orange County might want to double check their precinct lines first.

The release earlier this year of the 2020 Census figures is causing, as they do every decade, a redrawing of precinct lines.

The idea is to have each of the four precincts contain about 25 percent of the county's population, so that the county's resources are spent equitably.

County Commissioners, Justices of the Peace and Constables are elected by voters in their unique precincts while other Orange County officials are elected county-wide.

Orange County grew by about 3,000 residents since the 2010 Census, with almost all the growth taking place in Precinct 3.

Commissioner Kirk Roccaforte's Precinct 3 has stretched from the county's western-most limits at the Neches River south of Rose City to the Sabine River on the east side of the county where it enters the eastern West Orange city limits.

It includes all of Bridge City and West Orange and most of the Orangefield community and school district.

"Old Orange" which is in Precinct 1 under Commissioner Johnny Trahan is where the area most fell behind the growth trend and needed to be expanded to even the populations.

The proposed map, which, County Judge John Gothia says would be in effect as of Jan. 1, 2022, affected all three other precincts at their boundaries with Precinct 3.

Precinct 1 claimed much of West Orange as well as Chemical Row.

"The biggest change is Precinct 1 took in some of West Orange south of MacArthur, and it got a little more territory on FM 1130," Trahan said.

"It should make it less confusing for people in that area."

"My numbers are lower, but nothing changes my area," said Beauchamp, who represents all of Pinehurst and Mauriceville as well as pieces of Vidor and old Orange.

Viator says he hopes that after the 2030 Census, all of Vidor can be in the same precinct.

"I would like to try that, someday if it all evens out, but it's not feasible at this time," he said.

"I think it's fairly drawn," Roccaforte said of the new Precinct 3.

Attorney Robert Bass of the Austin-based law firm of Allison Bass & McGee LLP met with Commissioners Thursday, Oct. 14, having divided Orange County into census tracts and added or subtracted those tracts from current to neighboring precincts.

After the commissioners gave his work a preliminary OK last week, Bass' new chore is to place the right number of voting box precincts within each bigger precinct.

Counties have until Nov. 13 to turn in approved precinct map changes.

Filing to run for office in the March 1, 2022 primary elections begins Nov. 13 and continues through Dec. 13.

It's possible some already elected officials or others seeking to run as challengers might find themselves living in a different precinct under the boundary changes OK'd last week. 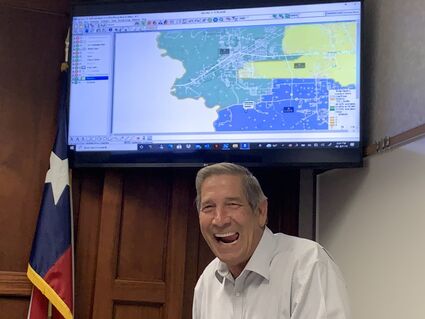 Precinct 4 Commissioner Robert Viator shares a laugh with other commissioners during an Oct. 13 meeting to redraw precinct lines in accordance with new population counts from the 2020 Census.

"While the Texas Election Code says a candidate has to be a resident in the territory they represent for the six months immediately before the election, it also says if the borders change within seven months of the filing deadline, all candidates have to do is have lived in the county for six months," Taylor said.