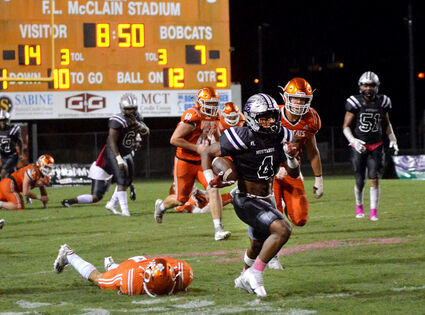 WO-S' Elijah Gales shreds through the Orangefield defense on one of his long runs. Gales finished the night with 177 yard, leaving 136 yards for him to run to break the all-time career rushing record, set by his coach, DePauldrick Garrett.

The 2021 football season in Orange County continues to be one for the record books, as all five teams remain in contention for playoff spots and have a combined 25-9 record through eight weeks.

The No. 4 ranked West Orange-Stark Mustangs (6-1, 4-0) handled business this past Friday evening with a 27-7 victory over the Orangefield Bobcats, despite a weather delay and temporary power outage to some of the F.L. McClain Stadium lights. Elijah Gales added another 170 yards rushing and three more touchdowns to his season total in the Mustangs victory. This Friday the Mustangs return home to face the Liberty Panthers (4-3, 1-2), which started the season red hot but have found contests in District 11-4A Div. II a bit more challenging with losses to Silsbee and Orangefield, both of which WO-S has already defeated. A victory this Friday will give the Mustangs a share of a district title at minimum with one game remaining at Bridge City on Nov. 5.

The Bridge City Cardinals (3-4, 1-2) dropped a tough one last Friday to the Silsbee Tigers, 19-14. Trailing 19-0 in the middle of the fourth quarter, the Cardinals offense came to life and put a scare in the Tigers with a chance to win the game in the final moments. The Cardinals are dealing with some growing pains this year, but that should provide plenty of valuable experience in the future. The Orangefield Bobcats (5-2, 2-1) fought the West Orange-Stark Mustangs hard this past week, and even lead 7-6 at the end of the first quarter before falling 27-7. Other than a handful of big plays, the Mustangs defense held the usually powerful Bobcats ground attack in check all evening. The Bayou Bowl resumes this Friday night as the Bobcats travel to Bridge City with playoff implications on the line. The Cardinals desperately need a victory to remain in the hunt for a playoff spot, while the Bobcats look to solidify a potential number two seed with a showdown with the Hamshire-Fannett Longhorns looming, but the Bobcats cannot afford to get caught looking ahead

The Little Cypress-Mauriceville Battlin' Bears (5-2, 1-1) were riding a big wave of momentum this past week, as the Bears were fresh off an upset of then state ranked Huffman Hargrave. The Bears lost a tough one at home last Friday to the Vidor Pirates, 29-12. The Bears had opportunities to make it a game, but the breaks were barely out of reach. Quarterback Ashton Landry was constantly under pressure, but running back Da'Marion Morris was averaging 10 yards per carry when he was carrying the ball. The Bears hit the road to take on the red-hot Lumberton Raiders (5-2, 2-0) on Friday. The Raiders have quietly gone from the 2020 cellar dweller to sitting in first place currently with Vidor with victories over Livingston (46-14) and Hargrave (24-16). LC-M cannot afford to overlook Lumberton if it hopes to keep its playoff hopes alive, as the District 10-4A Div. I race will go down to the last week. 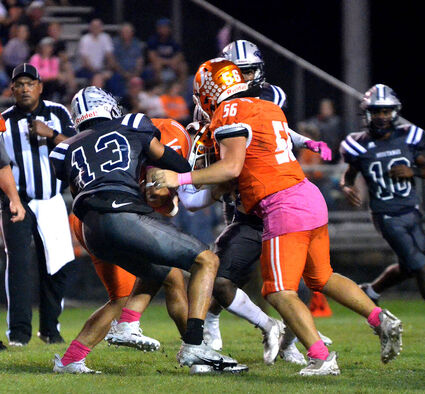 The Vidor Pirates (6-0, 2-0) defeated the LC-M Bears this past Friday, 29-12, for a hard fought road win as the Pirates used its ground-and-pound running game to control the clock, put points on the board and limit the Bears opportunities on offense. The offense eliminated the turnovers this week but made up for it with nearly a dozen penalties. Meanwhile, the defense harassed Bears quarterback Ashton Landry much of the night and bent but didn't break and made big stops when it needed to do so. Now Vidor returns to Pirate Stadium for its traditional "lights-out" homecoming game against the re-energized Livingston Lions (5-2, 1-1). Livingston lost to Lumberton, 46-14, in week 1 of district, but demolished Splendora, 49-14, this past week. Now the Lions face a Vidor Pirates squad off to its best start since the 1964 team went 12-0-1 and advanced to the state semifinals.

The Deweyville Pirates (3-3, 2-0) are looking to repeat as champions of District 12-2A Div. II and will need to get passed the Evadale Rebels (3-2, 2-0) this Friday. The Pirates are already assured a playoff spot as two of the six teams in the district, Sabine Pass and High Island, have canceled their football seasons. However, a district crown is on the horizon if the Pirates can beat the Rebels this week and Burkeville (5-2, 2-0) on Oct. 29.