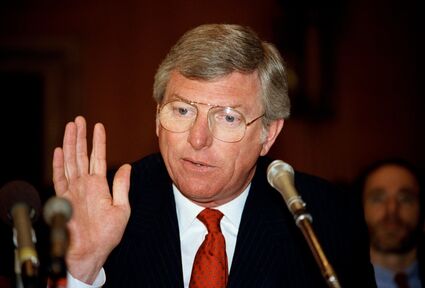 Mark White was the governor who succeeded Bill Clements' first term in office. White was a member of a prominent Houston law firm. On his first political venture he defeated Price Daniel, Jr. for attorney general. This was a surprise to everyone. It was believed Price Daniel, Jr. was shoo-in to be elected following in the footsteps of his father, Governor Price Daniel. White went on to defeat Bill Clements in a close race for governor, running primarily on promises to enhance the lot of Texas school teachers and better education. As White's term continued, there began to be muttering among teachers claiming that White had failed in his promise to give teachers pay raises and generally improve the lot of public education in Texas.

Fading the heat, White reacted by naming a blue-ribbon committee to study the lot of Texas education. He did so because another prevalent term floating around politics in Texas was that Texans wouldn't mind enhancing their contribution to public education, but were entitled to get a better product than was prevalent at the time. White named a Dallas billionaire, Ross Perot, as head of the committee to study public education and make recommendations. It fell my lot to not only serve on the Perot Committee, but eventually to be the lead sponsor in the Senate of the complete re-write of the Texas Education Code.

While subject to some criticism, Mark White will be remembered for contributing to great advancements in the quality of public education in Texas. While teachers rebelled in anger about a provision in the re-write forcing certified teachers to take a so-called competency test, the test was a total failure and contributed little to the improvement of teaching in Texas.

At the same time, coaches bridled at a provision of the re-write requiring what is known as "no-pass, no-play" in which students must maintain at least a "C" average academically in order to be eligible to participate in extra-curricular activities including the most sacred of Texas' high school activities – football!

In spite of the criticisms, the improvements made while White was governor made Texas public education better: Proper testing to determine whether or not students were learning what they were supposed to, regulating class size and creating a more objective and better method of judging the quality of teachers and their performance in classrooms.

In addition to public education, White backed many improvements in higher education which made post-high school education more available to more Texans than ever before. Reforms in the method of funding higher education spread the wealth by placing lesser institutions under the umbrella of the Texas A&M and University of Texas systems. Lamar University was a beneficiary of many of these reforms backed by White while he was governor.

Unfortunately, White was defeated in his effort to be reelected, defeated by the gentleman he had defeated four years earlier, Bill Clements.