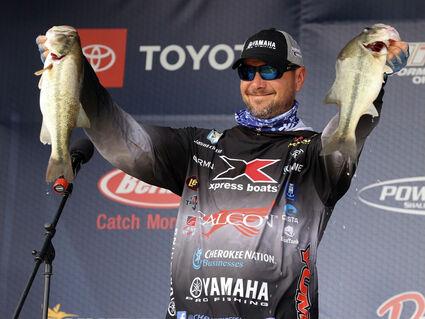 The Greater Orange Area Chamber of Commerce, presenter of the city's annual bass fishing tournament, was awarded $130,000 in hotel-motel occupancy tax funds by Orange County and the city Tuesday.

Nearly a half-million dollars in hotel-motel occupancy tax was in the process of being distributed to local non-profits Tuesday.

Orange County designated $263,000 for 19 different upcoming events or destinations Tuesday afternoon while the City of Orange was looking to spend $185,000 on a dozen good causes.

From those funds, the county and city are able to grant funds to local non-profits for use on activities that promote tourism and result in hotel nights – also called "heads in beds" – that, in turn refill the county and city coffers through future hotel occupancy taxes.

The HOT tax money is only payable as reimbursement, meaning each of the recipients must furnish receipts before receiving the funds.

The Chamber's biggest event for about a decade has been an annual fishing tournament, usually under the auspices of B.A.S.S., formerly known as the Bass Anglers Sportsmen Society.

The Bassmaster Elite tournament put on by BASS, is the top tier tourney and those tourneys in Orange have brought in as much as $3 million, according to economic impact studies.

A year ago, the county gave the Chamber $100,000 which was used as a buy-in with the BASS organizers.

Since the Bassmaster Elite only stops in a city no more than once every two years, Steve Jones, Chamber vice chairman, said the city would probably settle for one of Bassmaster's lower tier events.

"We were very successful last year and we plan to do it again this year," Jones said. "We'll again be a part of the city's music and rides festival."

Lutcher Theater was the second to top recipient.

The world-class performance center is maintained by the Stark Foundation whose matriarch, Frances Lutcher began the practice of bringing the country's best artists and shows to downtown Orange.

However, the Theater fends for itself in putting on programs.

Heritage House Museum was in line to realize $50,000 in grants as both the county and city threw in $25,000 to help with its programs and ongoing rebuild from hurricane damage.

The community organization is sponsoring a Juneteenth Festival next year.

The county set aside $8,000 and the city $3,000 for the Gulf Coast Cajun Music Festival, held each year at the Orange VFW Hall.

The county earmarked $30,000 to the Orange County Economic Development Corporation to pay for four tourism billboards on Interstate 10. The county set aside $10,000 for the Mauriceville Heritage Association.

Vidor's Music By The Stars concert and Vidor's Texas Star Music Festival each received $7,500 from the county. Cowboy Church was granted $7,500 by the county for its annual pro rodeo event.

Others winning county grants were Orange Amateur Radio Club HamFest ($6,500); Q-ing for a Cause BBQ Bash in Vidor ($4,000); Orange County Livestock Association ($3,000 for each of two livestock shows); and Vidor FFA ($1,500 each for two livestock shows).

The City of Orange was set to vote Tuesday night on $3,000 awards each for the Orange African-American Museum; Adventures 2000 Plus; Dragon Lady Airboat Services; and Gate City Guild.

The city awarded $2,000 to the South East Texas Art Guild.