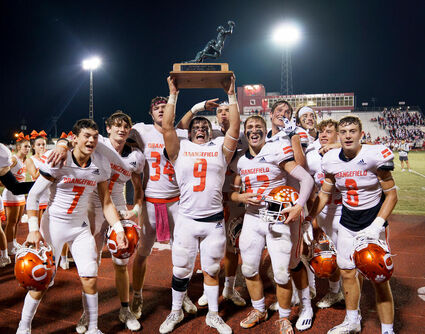 The Orangefield Bobcats hoist the Buzzie Gunn Trophy after defeating the Bridge City Cardinals 23-14 in Bayou Bowl 2021 hosted in Bridge City this season. The annual cross-community football game is a long tradition between the two cross-community rivals. Lifting the trophy overhead is Branden Babineaux with teammates, Mason Houghton, Evan Spears, Morgan Sampson, Beau Elkins, Jackson Humplik and others. The Buzzie Gunn Trophy will remain at Orangefield until the two teams clash again next year.

Two weeks remain in district play for our local football teams, and there is still plenty on the line for each team as all six could potentially make the post season. However, each team needs to take care of business this week before looking ahead.

The No. 4 state-ranked West Orange-Stark Mustangs (7-1, 5-0) pummeled district rivals the Liberty Panthers this past Friday 73-7 and the score probably could have been much worse. Mustangs running back Elijah Gales set the all-time WO-S Mustangs rushing record during the third quarter as he reached 3,258 yards. The record was previously held by Depauldrick Garrett, who just happens to be the Mustangs running back coach. The Mustangs defense added two interception returns for touchdowns as well during the contest. The victory effectively clinched 12th district title for West Orange-Stark as well. This week the Mustangs are off and are able to rest before traveling to Bridge City on Nov. 5 for the final district contest of the season and the start of post-season.

The Bridge City Cardinals (3-5, 1-3) fell to rival Orangefield 23-14 in the Bayou Bowl last Friday night in Bridge City. Quarterback Ethan Ocegeura had two more touchdown passes in the loss as both teams did all of the scoring in the first-half. Although not eliminated from a post-season playoff spot, the Cardinals have the tall task of needing to win both games against the Liberty Panthers this week and the West Orange-Stark Mustangs on Nov. 5, and the need to get a little help along the way. The Cards have an opportunity to grab another victory this week against Liberty. The Panthers defense is allowing nearly 32 points per game, so the high-flying Cards offense may find some success this week.

The Orangefield Bobcats (6-2, 3-1) laid claim to the Buzzy Gunn trophy again this year after defeating Bridge City 23-14 in the Bayou Bowl this past Friday at Larry Ward Stadium in Bridge City. Running back Cameron Dischler managed to surpass 1,000 rushing yards on the season with another outstanding performance, which included two more rushing touchdowns for the season. This week Coach Josh Smalley and the Bobcats are back home to take on the Hamshire-Fannett Longhorns (5-3, 2-2). A win will give the Bobcats the second seed in district as the playoffs approach, while a loss could cause a whole lot of complications as both Silsbee and the Longhorns only have two losses in district.

The Little Cypress-Mauriceville Battlin' Bears (6-2, 2-1) got back on the winning track this past Friday night with a 33-31 victory over the Lumberton Raiders (5-3, 2-1). The loss was the Raiders first in district play this season. LC-M running back Da'Marion Morris had over 100 yard rushing, a rushing touchdown, a receiving touchdown and he made an interception on defense to snuff out a Raiders drive as well. The victory put the Bears in a second-place tie with the Raiders, and it keeps the team in line for a shot at the district title should Vidor falter down the stretch. LC-M is back home this week to host the Livingston Lions (5-3, 1-2). The Lions defense is allowing 33.3 points per game in district play, so the Bears offense could explode for big plays this week.

The Vidor Pirates (7-0, 3-0) celebrated homecoming this past Friday night with a 40-7 victory over the Livingston Lions and have claimed sole possession of first place, for the moment, courtesy of the LC-M victory over Lumberton. The Pirates offense churned out nearly 400 yards on the night, while the Vidor defense held the Lions to less than 140 total yards. Running back Jason Watson scored two rushing touchdowns and added a fumble return for a touchdown on defense, all in the third quarter. The victory pushed Vidor into the Top 10 in updated Class 4A Div. I poll released Monday. Vidor travels to Huffman this week to face the Hargrave Falcons, who got back on the winning track with 41-7 win over Splendora. A victory this Friday will give Vidor a share of the district title, at minimum, prior to the Week 11 showdown with Lumberton, while a loss opens the door for several teams. 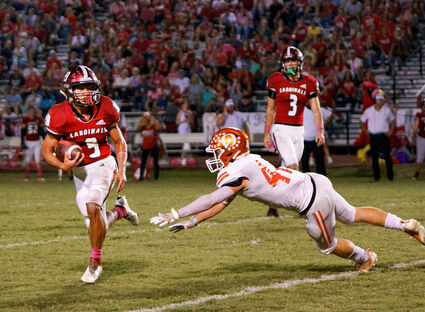 The Deweyville Pirates (3-4, 2-1) lost a bid to repeat as District 12-2A Div. II champions this past Friday when the lost the River Bowl to the Evadale Rebels, 26-22. The Pirates took a lead late in the game, but could not keep the Rebels (4-2, 3-0) out of the end zone one last time. Deweyville travels to Burkeville this coming Friday night to take on the Mustangs. A Pirates win will lock up the second seed in the playoffs, while a loss could push Deweyville into the third or fourth seed depending on how other contests shake out the final two weeks of district play.