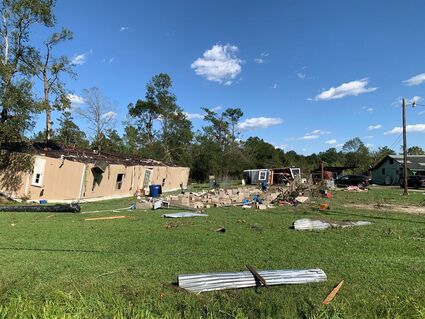 A double-wide mobile home on FM 1130 was flipped off its cinder block foundation by one of two tornadoes touching down in Orange County Wednesday, Oct. 27.

Michelle Burch said had just enough warning of the tornado bearing down on her tied-down double-wide mobile home to make it into her bedroom closet.

"We could hear it from about a mile away," she said of the 130-mile-per-hour winds that hit at mid-morning Wednesday, Oct. 27.

"It happened so quick. We were flipping through the air. I was, 'Oh my God, oh my God,' and it was over."

Burch's home on Farm to Market Road 1130 ended upside down about 20 feet north of the cinder blocks on which it had been sitting.

She had just gotten home from taking her two children to school. A friend and her 17-year-old son were also in the trailer when the storm hit.

Burch's friend was taken by ambulance, where she was treated and released. She suffered broken bones, Burch said.

On Nov. 2, Burch reported she and her sons had moved in with a cousin while she figured out what to do.

A total of five twisters struck across Southeast Texas and Southwest Louisiana on Oct. 27, according to a National Weather Service report, two in Orange County.

The first of two storms classified as EF2 tornadoes, began around 9:30 a.m. in Pinehurst and lasted just six minutes. 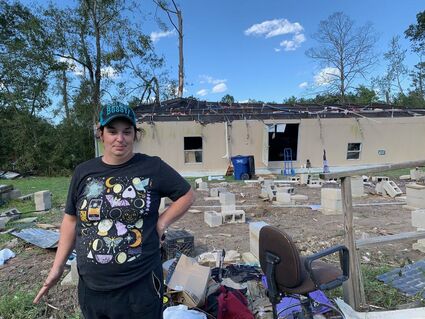 Michelle Burch of Little Cypress stands in front of her upside down mobile home on Thursday, Oct. 28, as she salvaged clothing and furniture tossed about by an Oct. 27 tornado.

The tornado was about 50 yards wide and traveled 2.1 miles. Videos of the funnel cloud crossing Interstate 10 went viral, particularly one showing the twister carrying an all-terrain vehicle with it. It also flipped a truck.

The one that sent Burch's trailer flying hit at 9:50 a.m. It cut a 100-yard swath seven miles, from Little Cypress to Hartburg in Newton County, the National Weather Service said.

In Orange County, it ripped up homes along on both sides of Hudnall Road and snapped a row of tall pines like matchsticks.

Building permit fees are waived for 90 days and the county's trash collection site will be free for those in affected neighborhoods for 30 days.