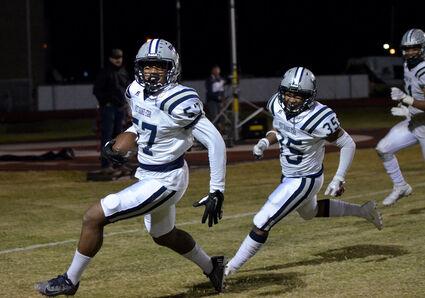 After Bryson Jordan blocked a Bridge City punt, Mustang Carlton Simien scored his first varsity touchdown in the 42-0 win over the Cardinals.

WEST ORANGE-STARK (8-1) over La MARQUE (4-6)--7:30 p.m. Thursday at Randall Reed Stadium in New Caney-This used to be a classic battle 20 years ago when the winner of this game usually got to the regional finals. But in tomorrow's meeting between these two teams, the district champion Mustangs are meeting the fourth-place team and should take care of business quite handily.

LITTLE CYPRESS-MAURICEVILLE (8-2) over PALESTINE (5-5)-7:30 p.m. Friday at Yates Stadium in Willis-The Battlin' Bears enjoyed their best season in a very long time and should continue their success over third-place Palestine Friday night.

BELLVILLE (9-1) over ORANGEFIELD (7-3)--7:30 p.m. Friday at Splendora-Although the Bobcats finished third in their district, they knocked over some very talented teams, like the one they're facing Friday night. Bellville had better be able to stop the 'Cats' running attack or they will be watching from the stands next week. VIDOR (8-1) over TYLER CHAPEL HILL (7-3)--7 p.m. Friday at Turner Stadium in Humble---The Pirates came one game away from a perfect regular season but still won their district championship. Chapel Hill has been a regular in the state playoffs and should not be taken lightly.

WEST SABINE (6-4) over DEWEYVILLE (4-4)--7 p.m. Friday at Bulldog Field in Jasper-The Pirates didn't have as good a season as last year but should hold their own against a good West Sabine team. An upset could very well happen Friday night.

JACKSONVILLE STATE over LAMAR-The Cards are the only team without a victory in the new conference and will have to play their best game of the season to change that on Saturday in Beaumont.

McNEESE STATE over HOUSTON BAPTIST-The Cowboys have been very competitive as the regular season gets near the end. If they can pull off an upset Saturday it will be a satisfying experience.