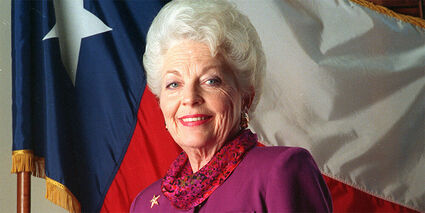 Ann Richards succeeded Bill Clements. Her familiarity with state politics began while secretary to Sara Weddington. Weddington is well known for having argued the case of Roe v. Wade.

Ann went on to run for and be elected to county commissioner in Travis County.

Later she was elected treasurer of the State of Texas. Among Ann's promises as treasurer was to advocate eliminating the office of treasurer and folding it into the duties of the state comptroller.

Ann's chance of winning the governorship was at best a long shot because she was running against a well-known millionaire, rancher and oil man, Clayton Williams. Clayton was involved in many activities including teaching a course called "B.S." in the business school of Texas A&M. Apparently, what played a large part of turning the tide in Ann's favor was a statement by Williams concerning rape.

Williams famously joked, "If one is to be raped, she should simply, lay back and enjoy it."

Elected in 1991, Ann was the first woman elected as governor of Texas since Ma Ferguson.

She set about making appointments for positions in state government reflect more nearly the makeup of the population of the state.

Ann was also well known for her wit and sharp tongue. One of her famous remarks occurred as she spoke at the Democratic convention when she said of George Bush, the first, "Poor George, he was born with a gold foot in his mouth."

She was also known for one who others dreaded being roasted by, including me.

Once at a roast, introducing the famous lawyer, Joe Jamel, Ann said, "The reason lawyers are like hookers is that for money they will take any

Unfortunately for Texas, Richards paid more attention to governing than seeking reelection and her defeat by George W. Bush was the beginning of the Republican takeover of Texas politics. It also happened to be the end of my senate career along with that of Jack Brooks.