Two teams advance to area round 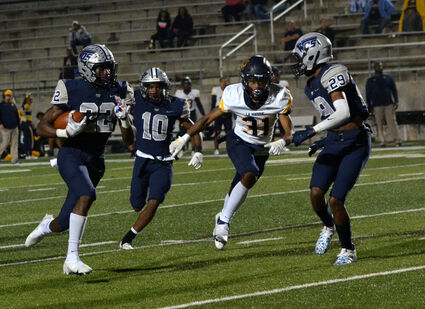 WO-S Jamaal Shaw was a thorn in Cougar Armand Robinson's side, as he picked off the quarterback twice in the second quarter, with the second one ending in a touchdown. Darren Anderson blocks for Shaw on the way to the end zone.

The Bi-District round of the Texas UIL high school football playoffs were not very kind to several of our local teams as three had their seasons come to an end, while two managed to advance to the second round and have their seasons continue for at least one more week.

The No. 4 state-ranked West Orange-Stark Mustangs (9-1) had no trouble in dispatching the La Marque Cougars this past weekend, 49-0. The Mustangs had a dominant defensive effort as the unit held the Cougars to under 50 yards of total offense for the game and an interception return by Jamaal Shaw. The WO-S offense jumped out to a 35-0 lead at halftime. Quarterback Keyshan Robinson tossed two touchdown passes to receiver Dakarion Judge, and running back Elijah Gales had two rushing scores on the night. Now the Mustangs face a familiar opponent in the Jasper Bulldogs (6-4). The last meeting was a WO-S 21-14 victory in 2018. Both non-district games in 2020 and 2021 were canceled due to Covid-related issues. The Bulldogs boast a stout defense in 2021, as this unit has been allowing just 11.3 points per game, including limiting high powered offenses like Vidor, LC-M and PN-G to 14 points or less. Ironically, these still all turned out to be losses for Jasper. The Bulldogs defense also limited defending state champion Carthage and district opponent to 28 points, its second lowest point output of the season. As good as the Jasper defense has been, its offense has not had the usual firepower of past seasons as the Bulldogs average 18.7 points per game. The unit has only scored 20 points or more in a game four times this year and will find points more difficult to score against the Mustangs defense.

The Little Cypress-Mauriceville Battlin' Bears (9-2) claimed a come-from-behind 34-24 victory over the Palestine Wildcats in the Class 4A Div. I bi-district round. The Bears had to overcome a large number of penalties at inopportune times but still found a way to win as all good teams do. The Bears had over 500 total yards of offense as quarterback Ashton Landry passed for over 190 yards and one touchdown and rushed for another 190 yards and three touchdowns. Running back Da'Marion Morris had over 130 yards rushing to his credit and one touchdown reception, as well as an interception on defense. This week the Bears will face the Columbia Roughnecks (6-4), the fourth-place team from District 12-4A. The Roughnecks, which beat North Forest 65-18 in the first round, average 44.3 points per game on offense and all four of the team's season losses were to playoff teams Bellville, El Campo, Stafford and Brazosport. The Columbia defense has definitely been more of a bend, don't break type of unit as it allows 32.7 points per game and has only held five of its 10 opponents to less than 30 points this season.

The Orangefield Bobcats (7-4) sensational football season came to a sudden halt this past Friday courtesy of the Bellville Brahmas (11-0). The Bobcats kept the game close for a half as Bellville lead 14-0 at the break. However, the Brahmas opened up the offense in the second half and roared to a 62-14 victory over Orangefield. The Bobcats scoring came in the third quarter as quarterback Brayden Parker connected with running back on a 51-yard touchdown pass, and, on the next drive, Parker punched it in from the 1-yard line. Unfortunately, the Bobcats could not contain the high powered Brahmas. 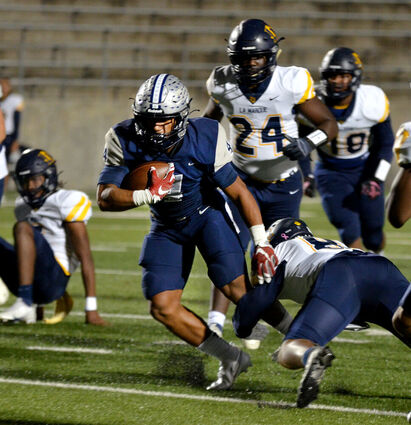 Mustang Elijah Gales breaks the middle of the La Marque Cougars heading for the end zone. Gales finished the game with 74 yards on 8 carries and 2 touchdowns, plus a 35 yard half back pass to Darren Anderson for a touchdown.

The No. 10 state ranked Vidor Pirates (8-2) claimed its first district title in five years but were unable to continue its dream season after a 25-20 loss to the Chapel Hill Bulldogs in the Bi-district round of the playoffs. The Pirates were flat for much of the game, and it could be attributed to the absence of Coach Jeff Mathews who was taken to the hospital for a medical issue while enroute to the game. Despite the missing piece, Vidor still had a chance to win at the end. The Bulldogs quarterback Demetrius Brisbon powered the Bulldogs to a 13-0 halftime lead, which included a 68-yard scoring run and 25-yard touchdown pass. He added a 70-yard touchdown run in the third. Two separate times the Pirates trailed by 13 points but answered each time. The Pirates defense, lead by senior Jordan Smith, forced a three-and-out and gave Vidor's offense one last opportunity with two minutes remaining. The Pirates marched the ball down to the 25-yard line, but an interception on fourth-and-11 sealed the Bulldogs victory.

The Deweyville Pirates (5-5) had high expectations this year but entered the playoffs as a second seed. Unfortunately, the Pirates season came to an end on Friday at the hands of the West Sabine Tigers, 40-38.