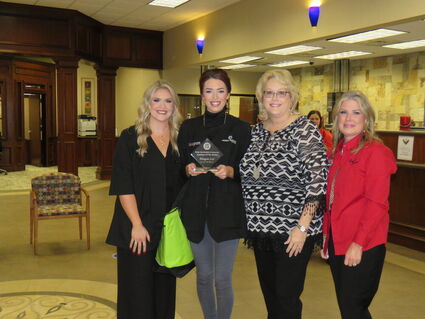 The Bridge City Chamber of Commerce announced that Reagan Lee, Employee of Merle Norman, has been named November Employee of the Month. Reagan was presented her award, sponsored by Energy Country Ford, by Ambassador Crystal Fabre, at the November Networking Coffee hosted by Bridge City Bank. Reagan Lee is an Employee of Merle Norman. She is a full time student at Deweyville High School, she is also a student at Lamar State College. She is due to graduate HS in December and also will graduate Lamar with her Associate Degree. Her dreams and goals are to attend Medical School and become a Pediatrician. Reagan goes above and beyond her role as an employee. With Covid hitting our area and owners Reagan has stepped up and filled in many extra hours of work while also attending school. She has also stepped up and taken over lots of the owners responsibilities like ordering and stocking the stores while the owner was out sick. She stands out as an employee and a citizen of the community. We are so proud to have her working for us at Merle Norman.