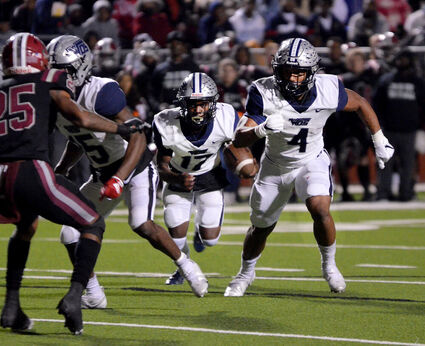 WO-S Quarterback Keyshawn Robinson follows his blockers Elijah Gales and Jailen Brown. Robinson had 6 carries for 20 yards and a touchdown.

The 2021 football season continues for one more week for the Bears and Mustangs as both had solid victories this past Friday night in the Area round of the playoffs. Now each team will face its toughest opponent of the season.

The No. 4 state-ranked West Orange-Stark Mustangs (10-1) defeated the Jasper Bulldogs 20-7 this past Friday at Beaumont ISD Memorial Stadium in a defensive slugfest. The Bulldogs struck first on a 61-yard touchdown pass for a quick 7-0 lead early in the first quarter, but it was only a matter of time before the Mustangs evened the game, 7-7, going into halftime thanks to a 1-yard touchdown run by Elijah Gales. The WO-S defense stiffened in the second half and held Jasper in check, while the Mustangs added a 33-yard touchdown run by Dakarion Judge and a 5-yard scamper by Keyshawn Robinson for the 20-7 victory. Now WO-S moves on to the Regional Semi-finals to face the No. 6 state ranked Bellville Brahmas. The Brahmas (12-0) averaged over 50 points per game offensively during the regular season and its defense allowed an average just 8 points per game. In the playoffs, Bellville defeated Orangefield, 62-14, in the first round and beat Rusk, 41-20, in the second round. The Brahmas have a potent offensive attack with running backs Richard Reese and Robert Briggs. In the most recent playoff game, Reese had a big run of 79-yards and 4-yard touchdown, while Briggs had scores of 54-yards and 8-yards. Quarterback Reid McCann is not to be underestimated as well, as he added a 60-yard touchdown pass against Rusk, and this was all in the first-half. As explosive as the Brahmas offense may be, it has definitely not faced a top-quality defense like the Mustangs feature, so this game will definitely be a test for both squads marquee units. 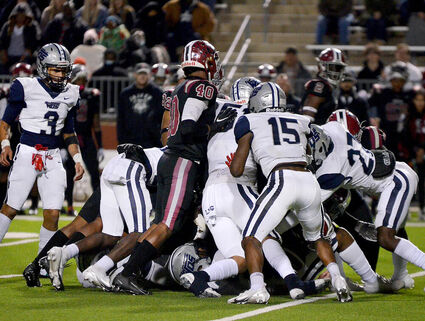 It was a Jasper "dawg pile" put on by the WO-S Mustangs all throughout the game. Jasper was held to 140 total yards, most of those coming in their first drive where they scored on a 61 yard pass.

The Little Cypress-Mauriceville Battlin' Bears (10-2) defeated the West Columbia Roughnecks, 42-21, to advance to the third round of the playoffs and, in the process, reach the 10-win mark for the first time since 1997. The Bears dominated this contest by churning out more than 450 total yards of offense, as running back Da'Marion Morris had over 220 yards rushing and three touchdowns, while quarterback Ashton Landry scored three rushing touchdowns on 100-yards rushing. LC-M will now face the No. 3 state-ranked El Campo Ricebirds from District 9-4A. El Campo (11-1) averages 52.9 points per game on offense during its regular season, but its defense is more of a bend, don't break type of unit as it allows a hefty 26.7 points per game. The Ricebirds lone loss of the season was 38-17 to Fulshear, from class 5A, in week 2 of the season. Fulshear finished in fourth place in its district and lost in the bi-district round of the playoffs. The Ricebirds defeated Houston Yates, 63-18, in the first round of the playoffs while scoring 36 points in the first quarter. Then, in the second round, El Campo beat an explosive Lindale Eagles unit, 56-42. El Campo's offense features the number two rated running back in the country for the class of 2023 in Rueben Owens and he showed his skills as he ran for over 320 yards on 38 carries and four touchdowns of 12-yards, 53-yards, 47-yards and 8-yards against Lindale. The other running back, Johntre Davis, is not to be underestimated as he had three touchdowns on 14 carries for nearly 150 yards. El Campo finished the game with over 560 yards rushing, while attempting just two passes, in the win. The Bears offense will have opportunities to put up points, but it will be the LC-M defense that will be the focal point this week.