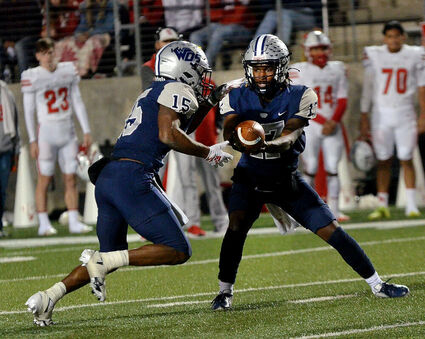 Mustang quarterback Keyshawn Robinson hands off to Jailen Brown. Brown, who plays both offense and defense, had 7 carries for 56 yards, caught 3 passes for 32 yards and scored six for WO-S.

It was a black Friday indeed for several teams in the high school football playoffs around the state of Texas as six defending state champions lost games. Better still is the fact that the last two teams standing representing Southeast Texas are both from Orange County. 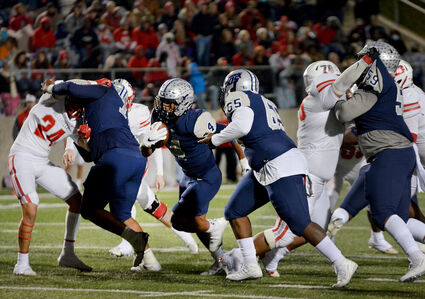 The WO-S offensive line blocks as Mustang Elijah Gales hits the holes. Gales had a superb outing against the Bellville Brahmas, 24 carries for 178 yards and 2 touchdowns.

The No. 4 state-ranked West Orange-Stark Mustangs (11-1) did what the team always does and that is play a solid game of football and defeated what was considered by some to be a better Bellville football team, 36-17. The Mustangs defense held the previously undefeated and No. 6 state ranked Brahmas (12-1) to its lowest offensive point-output of the season and kept Bellville from scoring any points in the second-half. The WO-S defense held the Brahmas high-octane offense to under 250 total yards for the game and added a 14-yard interception return for a touchdown. Meanwhile, the Mustangs offense had what could be considered its best showing of the season as running back Elijah Gales had 190 yards rushing and two touchdowns, and quarterback Elijah Robinson completed six passes for over 70 yards and had a rushing touchdown as well. Now the Mustangs will face the No.5 state ranked China Spring Cougars in the Class 4A Div. II Regional Finals. China Spring (13-0) defeated two-time defending state champs Carthage 27-17 and snapped its 41-game winning streak in the process this past Friday night. The Cougars are responsible for upending the Mustangs in the second round of the playoffs in 2020 by the score of 35-22. China Spring's offense is directed by quarterback Major Bowden, who passed for 100 yards and a touchdown and rushed for another 70 yards against Carthage. China Spring is the champion of District 9-4A. The Cougars, on offense, averaged 49 points per game in the regular season and are averaging 41 per game in the post season. Defensively the Cougars allowed 10.8 points per game on average during the regular season and are allowing 10.3 points on average this post-season. In the playoffs, China Spring has defeated Madisonville, 50-7; Sealy, 48-7; and No. 1 state ranked Carthage, 27-17.

The Little Cypress-Mauriceville Battlin' Bears (11-2) have proved they are peaking at the right time as the Bears beat the No. 3 state ranked El Campo Ricebirds, 24-21. The Bears, winners of six straight games, held the Ricebirds (11-2) high scoring offense in check all night, including running back Rueben Owens who had 2,800 rushing yards on the season. The LC-M defense was fantastic all night as it limited Owens to just 175 rushing yards and three touchdowns, far below his playoff average of more than 300 yards per game at that point, and it held El Campo to its second-lowest offensive point output of the season. The Bears rushing attack was nearly unstoppable as it churned out over 310 rushing yards against El Campo courtesy of running back Da'Marion Morris and quarterback Ashton Landry. Landry suffered an injury in the fourth quarter and was replaced by quarterback Dean Reynolds, who helped guide the Bears to the win. It is unknown at this time the extent of Landry's injury and if he will be able to play or not next Friday. With the win, LC-M now moves onto the fourth round of the playoffs and will face the Tyler Chapel Hill Bulldogs, the fourth-place team from District 9-4A Div. I. The Bears and Bulldogs have two common opponents on the season with Livingston and Vidor. LC-M lost to Vidor, 29-12, in Week 8 and beat Livingston, 33-15, in Week 10. The Bulldogs defeated Livingston, 35-15, in week 2, and then held on to beat Vidor, 25-20 in the bi-district round of the playoffs. Chapel Hill defeated Brazosport, 51-27, in the area round, and beat its District 9-4A rival and champion, No. 6 state ranked Kilgore, 41-35, in a double overtime thriller this past Friday. The Bulldogs are also peaking at just the right time and are riding a five-game win streak behind the leadership of freshman quarterback Demetrius Brisbon, who had 88 yards passing and 76 yards rushing and two touchdowns against Kilgore. Freshman running back Rickey Stewart had over 190 yards rushing and two touchdowns in the game as well.