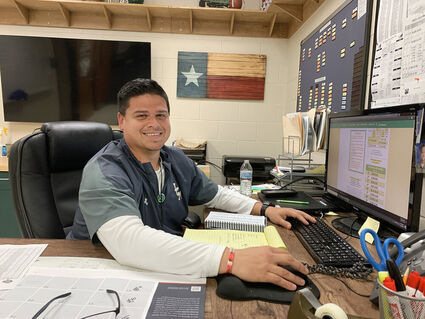 When West Orange-Stark beat Little Cypress-Mauriceville 39-20 on Sept. 3 for what turned out to be the first of 11 straight wins, few knew it was setting up what could be a December to Remember for Orange County football.

Both LCM and WOS have made it to the Elite Eight round – the Region 3 finals – of their respective playoff brackets.

The Bears, who were 1-7 a year ago during the COVID pandemic, are led by first-year head coach Eric Peevey. They tied Vidor for the District 10-4A-I championship.

The last time LCM won district in football and advanced four rounds deep in the playoffs was in 1997, under David Williams.

China Spring knocked WOS out of the playoffs in the second, or area, round last year, when eight Mustangs were out with COVID.

The Cougars ended up winning 35-22 after three special teams blunders by WOS led to 21 first-half points.

But the Mustangs know the path to the fourth round of the playoffs well. This is the ninth time in 11 years they've played for a Region 3 crown under veteran coach Cornel Thompson.

A member of the original WOS coaching staff in 1977, Thompson has coached the Mustang to two of their four state championships.

"What Coach Thompson does at West Orange, I don't know if it can ever be done again," Peevey said.

That loss to the Mustangs was quite a teaching opportunity for a team that's made good use of many since last spring.

"The players were so open to the ideas and things I was bringing in in March because they wanted to win, they were willing to do the things to win and show that they could do some things at a high level," Peevey said of the welcome he received when arrived at LCM after four years as head coach at Beaumont West Brook.

Quarterback Ashton Landry and running back Da'Marion Morris have combined to be responsible for 50 of the team's 55 touchdowns.

The game against WOS, their second of the season, caused the Bears to up their game another notch, the coach said.

"It's seems like a year ago we played them," Peevey said, "but I think that game really meant a lot to our team because it showed our team how to play at that level.

"We talk to our team about that: Great teams when they know they're in a dogfight, can turn it up to another level, and you have to practice at that level to be able to play at that level.

"That one game really meant a lot for our program because it showed our kids the level that we need to play at to play against great teams."

Thompson has been in a dogfight of his own this season.

He began the preseason being hospitalized with COVID-19. It turns out he's a COVID long-hauler and he's recently been back to the medics with new symptoms.

"We're going to hang in there," he said of his health. "We've got no choice."

Asked if he might retire at the end of this season, Thompson said, "Who knows?"

His team, like always, has just gotten better and better as the season rolled along.

"We have 12 seniors, only eight of them playing," the veteran coach said. "We're on our third quarterback.

"We had internal problems – attitude problems – we had to work out. Right before the playoffs, I could see the change. The attitude got better.

Running back Elijah Gales tops the team in yards from scrimmage (1,533 rushing and receiving) and TDs responsible for (26 -- 22 rushing, three receiving and one passing.

Sophomore Keyshawn Robinson has completed 55% of his passes (41 of 74) for 483 yards and five TDs while rushing for four TDs.

Offensive lineman Demetrius Hunter, one of the nation's top college prospects, made news this week by decommitting from Oklahoma after Sooners coach Lincoln Riley quit Sunday to go to USC.

Meanwhile, Carmello Jones, leader of the Chain Gang defense that allowed 10 points per game this season, has 99 tackles, 16 tackles for loss, 16 QB pressures and 11.5 sacks. He is chasing the school record of 15.5 sacks by Paul Thomas in 2000.

Thompson says his team is taking nothing for granted in China Spring, this week's opponent, as his team is two wins away from another state championship game.

"They still have the same quarterback, Major Bowden, and we've got to do something about him," the Mustang coach said. "We will have our main unit this year, but we must perform."