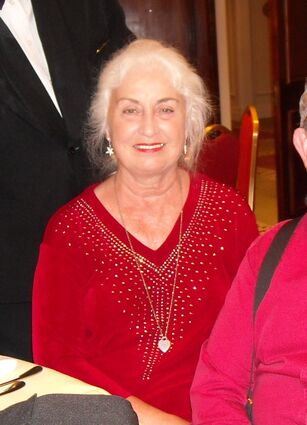 Carol Joyce Meyers passed into the arms of her Heavenly Father on Monday morning, October 25, 2021.  She joins her parents, her three sisters, and her beloved grandmothers, "Ma" Ola and Arbie.

Cremation arrangements have been entrusted to Dorman Funeral Home in Orange, Texas.

Carol was born on February 14, 1943, in Converse, Louisiana, to Helen Rogers and John Hugh "Nima" Mahfouz.  She grew up a country girl in the hills and fields of Northwestern Louisiana, and was always very proud of her French Louisiana, Mediterranean, and German heritage.  Upon moving to West Orange in the early 1950s, she made many life-long friends.  She finished high school one year early, and still graduated third-ranking in her class.  She attended the Mims School of Beauty in Port Arthur, and kept her cosmetology license active until recently.  Carol married James Edward "Ed" Meyers on March 2, 1962, and together they had three children that she was always very proud of – Jan, Jon, and Joel.  She used to say,  "I love all my three children equally, just differently since they are all unique from one another."  When her marriage ended in the late 1970's, she found a new career working out at DuPont SRW, and her co-workers became an extension of family for her.  Even after she'd long retired from there, she would recount special memories like they happened yesterday.  Following her retirement from DuPont, Carol's life became about service to others, and she was very happy to give of her time to Orange Christian Services and work in the Soup Kitchen at First Presbyterian Church.

In her personal time, Carol loved the beach.  Whether it was going to visit friends at Crystal Beach, or going on a family vacation to Fort Walton Beach, Florida, she loved nothing more than to slip off her sandals and feel the sand in between her toes.  She was probably more at home on the beach than anywhere else in the world.  She loved to travel, and was very proud that she'd been able to journey to Europe, Russia, Australia, South America, and so many other places.  A lifelong dream was realized when she found herself at the peak of Machu Picchu in Peru.  On a more domestic note, she made the best homemade buttermilk biscuits around, and prided herself on her cheesecakes and red velvet cakes.  Her friends would often come to call for a cup of fresh Folger's coffee and a piece of cheesecake.  In her many years as a member of McDonald Memorial Baptist Church, she was known to many third grade Sunday Schoolers as "Miss Carol".  She also enjoyed studying the Bible with her Bible Study class, and looked forward to each new session.  She looked forward to lunches and events at the Lutcher Theater with her many friends.  During the holidays, she loved to just ride around Orange looking at the Christmas decorations.

Carol was very proud of the fact that she was strong-minded, independent, and in very good health until COVID took her in just a little over two weeks.  As strong as she was, it was stronger, and robbed those who love her of someone so very special and precious.

Carol is survived by her three children:  Jan E. Meyers of Mauriceville, Texas; Jon E. Meyers of Houston, Texas; and Joel E. Meyers of Orange, Texas.  She is also survived by two grandchildren and five great-grandchildren, numerous cousins, and countless nieces and nephews.  In addition, the numerous close friends she had whom she considered family are all remembering her at this time.

In accordance with Carol's wishes, there will be no memorial service.  If desired, memorial contributions may be made to the Salvation Army, Orange Christian Services, or the First Presbyterian Church Soup Kitchen.