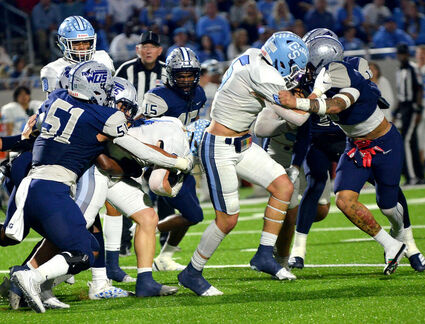 Mustang Bryson Jordan leads the tackle on China Springs Kyle Barton. The defense played tough all night but were not able to stop the Cougars

The 2021 football season finally concluded for the last two teams in Southeast Texas, as the Bears and Mustangs both lost in the Regional Finals this past Friday night.

The No. 4 state-ranked West Orange-Stark Mustangs finished the season with a record of 11-2 following a 31-14 loss to the No. 5 state-ranked China Spring Cougars this past Friday night at Tomball ISD Stadium in Tomball. China Spring (14-0) moves on to the State Semi-finals to face Cuero. The Mustangs jumped out to an early 7-0 lead courtesy of a 3-yard touchdown run by Elijah Gales and, early on, it looked as if the Mustangs had the Cougars on the ropes as the WO-S defense recovered two fumbles and an interception early in the first half. However, China Spring never panicked and finally found its pace. China Spring answered the WO-S touchdown with one of its own as quarterback Major Bowden hit the left sideline and outran the Mustangs defense for a 72-yard touchdown. The Cougars stymied the Mustangs offense much of the game after Gales sustained a significant injury to his left arm late in the first quarter. China Spring lead 10-7 at the half, and Bowden added a 70-yard scamper for a touchdown in the third quarter for a 17-7 lead. WO-S answered with a 70-yard touchdown pass to cut the Cougars lead to 17-14, but that would be it for the Mustangs. Bowden added a 44 yard touchdown run and connected on a 44-yard pass to the goal line that lead to another Cougars score. China Spring amassed over 450 total yards of offense for the game with nearly 390 yards coming on the ground. The Mustangs were limited to approximately 230 total yards on the night. 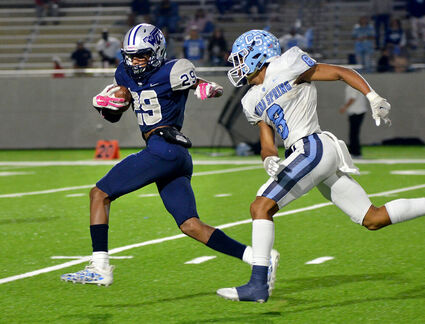 Mustang Darren Anderson catches a 70 yard touchdown pass from quarterback Keyshawn Robinson to put the Mustangs within 3 but China Springs answered with their own touchdown and the Mustangs lost, 31-14.

The Little Cypress-Mauriceville Battlin' Bears finished the 2021 football season with an 11-3 record, an amazing turnaround from the 1-7 record in 2020. The Bears reached the fourth round of the playoffs for only the second time in program history before losing 31-14 to the Tyler Chapel Hill Bulldogs on Friday night at the Berry Center in Cypress. The Bulldogs jumped out to a 14-0 lead in the first quarter as freshman quarterback Demetrius Brisbon connected on a 3-yard scoring pass and then had a 1-yard touchdown run. The Chapel Hill defense added to the scoreboard with a 55-yard fumble return to make it 21-0 at the break. Bears quarterback Ashton Landry was hampered by an ankle injury he suffered the week prior, so backup Dean Reynolds and running back Da'Marion Morris shouldered much of the load. The Bears found paydirt in the third quarter as Reynolds hit Morris for an 18-yard touchdown pass, and then Morris added a 1-yard touchdown run in the fourth to cut the Bulldogs lead to 21-14. Following a failed onside kick attempt, the Bears defense forced Chapel Hill into a fourth down-and-one at the Bears 33-yard line. Brisbon then proceeded to romp 33-yards to the end zone to extend the Bulldogs lead, 28-14. Chapel Hill added a late field goal after a turnover on downs by the Bears to claim the victory. LC-M had 350 total yards of offense, while the Bulldogs had 346 total yards. Chapel Hill advances to the state semi-finals for the first time since 2011, when the Bulldogs also won the State Championship that year. The Bulldogs will play the No. 1 state-ranked Austin LBJ Jaguars next.