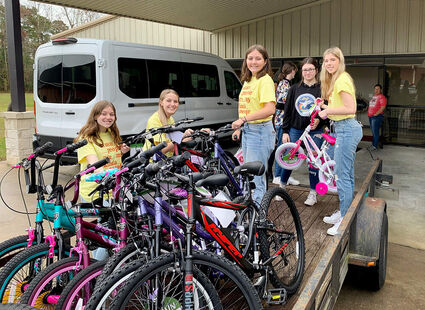 T'is the season for giving and Orange County Good Samaritans are pouring out their hearts and checkbooks to make the Angels sing for Christmas.

Between them, the Bridge City-Orangefield Ministerial Alliance, the Sheriff's Office Orange County Blue Santa drive and the Salvation Army are supplying toys and other Christmas gifts for more than 1,000 area children and teenagers, most of their names plucked right off Angel Trees.

The annual tradition of writing the name of a child whose parents may not be able to afford Christmas presents on a cut-out angel and pinning that angel on a tree at a church, convenience store or other participating business fuels much of the giving.

The Ministerial Alliance, a feeding program for needy families operated by 20 county churches, collected gifts for 407 children from 162 families and distributed them to the parents on Dec. 9.

Salvation Army is distributing donated toys for 350 children Wednesday, Dec. 15 while Blue Santa, a county-wide program run by the Orange County Sheriff's Office with plenty of help from other first responders, non-profits and volunteers, is providing toys for 342 children from 139 families on Saturday, Dec. 18.

Parents, many of them regular clients for Ministerial Alliance or Salvation Army services, pre-registered their children for the holiday gifting.

And Orange Christian Services is registering those families in need who didn't sign up for one of the other three.

"We give out special holiday food orders, and we also do a toy program," said Judy Jensen, executive director for OCS.

The agencies share their lists to avoid families registering for more than one gift program and parents are scheduled for pickup times for a bag full of toys ready to be wrapped and placed under the tree.

"It's a blessing just to help these families and make sure their kids get what they're wishing for from Santa," says Jo Bossier, a Ministerial Alliance volunteer.

She was among more than 50 volunteers, church members and even some student council members from Orangefield High, on hand at Liberty Baptist Church in Bridge City on Dec. 8 to sort toys into age groups, and then to match the children's wish lists as close as possible.

New toys are received from the annual Bridge City Christmas parade – they're accepted as entry fees – though Melissa Pitts, the Alliance's Christmas Coordinator, said the bulk of this year's toys were purchased with donated funds.

"This way, we can see what's needed and go shop," she said.

Almost as much fun as the warm spot in the heart you get by giving to appreciative children is the shopping for gifts, as the Blue Santa volunteers know.

Saturday, Dec. 11, Little Cypress-Mauriceville students joined representatives from the District Attorney's office, the Fai Do Do Mardi Gras krewe,  Woodmen of the World Life fraternal benefit society and friends and retirees from the Orange County Sheriff's Department on a buying spree at the Bridge City Walmart.

"We spend about $30,000 [overall] and that's not counting other people who buy stuff. We got about $15,000 worth of donated toys," explains Susan Bland of the Sheriff's Office, a veteran of many years of Blue Santa drives.

Bland said many of this year's donations were given in memory of the late John Badeaux, the Sheriff's Deputy who handled the logistics of Orange County's Blue Santa for decades.

Badeaux died after a battle with COVID-19 earlier this year.

"This is the first year without him," Bland said. "There have been some teary-eyed conversations.

"I go to pick up a donation and people talk about how much they miss him. 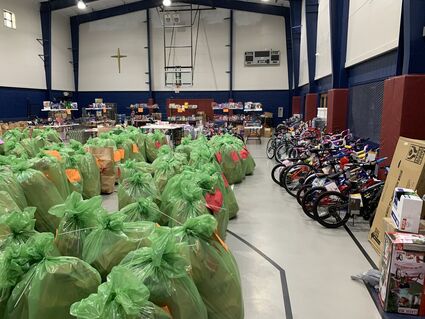 Clothing, bicycles, dolls, and toys await Wednesday pickup by the parents of nearly 400 children on the receiving end of the Salvation Army's Christmas Angel Trees.

"They say, 'This donation is in memory of John Badeaux.'"

At the Bridge City Walmart, Katie LeBlanc, a legal assistant at the DA's office, turned in her third shopping cart heaping with a family's requests.

She picked up another manila folder from Marlene Merritt, wife of former Sheriff Keith Merritt, and headed back to the toy shelves.

For LeBlanc, a Blue Santa first-timer whose job has her working with Child Protective Services, Saturday's shopping was special.

"To give back to the children is awesome," she said. "There are so many with needs."