Alternative medicine for any fisherman 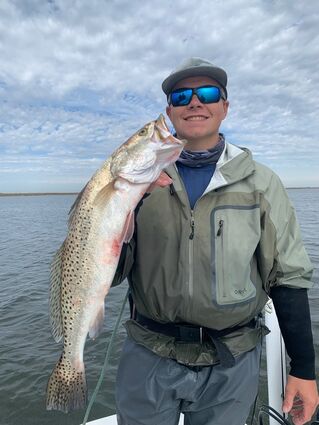 Corky's and slow sinking mullet imitations are tailor made for this time of year.

In every sport there are different levels of accomplishment, different levels of skill. In baseball you have rookie leagues, minor leagues, and then you have the guys in the majors who are at the top of the food chain so to speak. Far too many times in publications just like this one, writers just like myself take for granted that everyone out there fishes just like we do. Nothing could be farther from the truth if you just get right down to it. I am by no means better or more accomplished than other people who fish, I just have a little more time on the water than most so it gives me a little bit of an opportunity to make a few judgment calls.

On more than a regular basis I get asked about certain techniques or how to use different lures by fishermen who genuinely want to get better. Each individual has strengths and weaknesses and for some the thought of fishing with a lure many of us take for granted is a daunting task. I can remember when I was really fishing a bunch of freshwater and all I could think of was catching bass. There were different times during the year that I could catch fish with the best of them, throwing spinnerbaits and topwaters along with Texas rigged worms were right down my alley. Now my baits of choice didn't always work and other techniques were needed to catch fish, at that point I had a problem.

For the life of me I could not fish a jig, I felt like I was suffocating it was so slow. Finally I made myself take only a tackle box full of jigs so I had nothing else to fish or change to and was forced to fish only a jig all day long. The radical thinking proved to be a good idea as I finally became better at the art of jig fishing, I still don't like it but at least I can do it.

Saltwater anglers have similar difficulties and for many more than you would think it's a real problem. I can't tell you how many people have asked me for my opinion on how to fish a Corky, its way more than you would believe. For many situations just like this there are some excellent alternatives that often time will work even better than the lure you struggle with. For example we'll just use the Corky since we already mentioned it.

The Corky is easily one of the most recognizable lures on the gulf coast, especially here in Texas where it's almost considered royalty by many. For all those who praise this lure for it's fish catching ability there are just as many who curse it because they can't get a grip on how to properly fish the bait. Well for all those of you who fall into the struggling category let me introduce you the remedy, shallow running crankbaits or stick baits as they are also known are just what the doctor ordered.

For years these baits have been a staple of freshwater fishermen all over the country, they have a subtle motion that really attract vicious strikes and can make even the most finicky fish turn on one in a violent reaction strike. I have really become a fan of these baits as well as other crankbaits for saltwater use. Crankbaits are usually categorized by the depth that they will run, some shallow models swim just under the surface to about 1 foot.

Other big billed models will plow down to depths of over 20 feet if need be. My favorites are the 1 to 4 foot models, they are roughly 4 inches in length and have a small bill that creates a tight wobble when reeled down or twitched below the surface. These baits are perfect for working shallow shell because they dive down to the shell and rattle around in there as they are being retrieved. Once you feel the shell you can stop reeling and the bait will actually back up and start floating to the surface, this is when you get a high percentage of your strikes. That subtle motion once you have come into contact with the bottom is tough for fish to resist. I know these baits are some of my favorites for catching redfish, they just inhale them. Some of the more productive models I have ever fished are the Slapstick by Bill Lewis, Thunderstick, Rogues,  Yo Zuri Crystal Minnows and the Long Cast Minnow by Rapala.

In order to fish these baits you don't need a ton of finesse or a secret pattern to catch fish, these lures are very user friendly. Using basically the same action you use working a topwater plug you just point your rod tip towards the surface of the water and either reel in with a constant retrieve or twitch the bait with brief pauses as the lure comes in contact with the bottom. The built in action and sound will take care of the rest, it's hard to work them wrong. I have found that taking the split rings off the nose and tying a loop knot seems to help the action and keeps the rings from fouling on the bill of the plug. If and when you get caught up in shell most of the time the lure will come free when given a little bit of slack. Even when you break one off about 80% of the time the lure will float to the surface where you can retrieve it and use it again. It's awful hard to go wrong with a bait that provides you with that type of confidence.