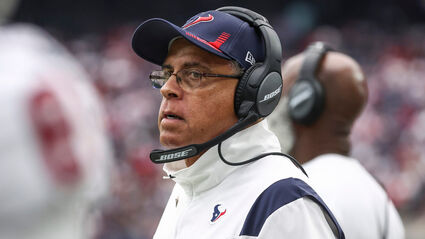 The "Big Game" that everyone was waiting for with baited breath is happening Sunday at Jacksonville when the Jaguars are hosting the Houston Texans in the battle for the 2022 No. 1 draft pick, which would go to the team finishing the season with the funkiest record.

One of the biggest reasons both of these teams are playing in the Super Bowl for Losers is that both first-year coaches Urban Meyer of the Jags and David Culley don't have a clue what it takes to win football games in the National Football League, according to the media in both cities, especially the Houston Chronicle.

There have been reams and reams of copy flowing from the Chronicle trying to get Culley run off., especially in the past couple of weeks.

The situation is quite different in Jacksonville where the media closest to the Jaguars fear that Meyer is going to pull a Bobby Petrino tactic and just walk away. But the one item keeping him at the helm of the Jags is (you guessed it) money.

"That might be the best thing going for Meyer at this point: the reality that an NFL divorce after only one season may still be perceived by Khan as more expensive than holding fast and praying for a revelatory turnaround," the Jacksonville article points out.

Bobby Petrino was the head coach of the Atlanta Falcons until one day in December, 2007, "the successful college coach bombing so badly after 13 games that he snuck away one morning to take a head coaching job with the Arkansas Razorbacks," according to a recent article in sports.yahoo.com.

Meyer also has been involved in only 13 NFL games-losing 11 including one to the Houston Texans in the season's opener-plummeting to a new low Sunday when the Tennessee Titans shut the Jags out 20-0.

The one person being hurt the most by Meyer's incompetence is quarterback Trevor Lawrence, the No.1 overall pick in the 2021 NFL draft. Like David Culley, Meyer insists on running the football without having any qualified running backs. Whenever Lawrence drops back to pass, the opponent has eight or nine defenders also dropping back into the secondary.

Sports Illustrated received anonymous reports noting that Meyer has berated his assistant coaches and called them losers, which was vetted by NFL Media. This shows at the very least that enough people are disgusted by Meyer that they would willingly risk their livelihood to leak his lowest moments.

Meyer suggested after Sunday's loss to the Titans "to fire the people who are whistleblowing their concerns to the press". But who would he replace them with? Who, with any NFL experience, would want to work for Meyer now?

The bottom line is that the team reportedly is laughing behind Meyer's back.

Things aren't much better in Houston, although Culley released his top linebacker for consistently violating team rules and has sat out players who skipped team meetings and were late to other mandatory functions.

His biggest problem is the same as Meyer's-he insists on running the football without having healthy ball carriers and fell in love with Tyrod Taylor as his starting quarterback despite him being injury-prone and inconsistent when he was healthy.

Last week he finally benched Taylor in favor of rookie Davis Mills, who kept the Texans in the game Sunday against Seattle for the first half (16-13), but then watched the defense fall apart after the intermission, which led to a 33-13 final score for their 11th loss in 13 games. Culley told the Chronicle last week that Mills would finish the season as his quarterback.

Last week General Manager Nick Caserio didn't back Culley for a 2022 return when every other GM in pro football would have supported a first-year head coach under similar rebuilding circumstances.

"Anything we do in the off-season from evaluating our scheme to evaluating where our program is headed, we'll have those conversations after the season," Caserio told a Houston radio station.

And as one writer for the Houston Chronicle sports department put it: "The Texans have been good at one thing and one thing only during a historic 2021 season: suspending players, disciplining players and paying players millions of dollars not to play for the Texans."

I personally think David Culley will be a "one and done" head coach even though I picked his team to upset Jacksonville Sunday. He's not nearly as green as Urban Meyer is to the NFL!!!

KWICKIES...Members of the U.S. Navy are probably dancing with their mops this week after their football team upset Army 17-13 Saturday at Met-Life Stadium in East Rutherford, N.J. Although the Black Knights were favored by more than a touchdown, their plays and defensive schemes must have been drawn up by a Kindergarten class.

The new attendance numbers for Texas high schools were released last week and will probably affect the Orangefield Bobcats who are expected to drop from Class 4A-II to 3A-I. So now instead of worrying about the West Orange-Stark Mustangs, the Bobcats will have Newton to think about, unless the Eagles drop to Class 2A.

On a personal note, I've known Cornel Thompson for more than a half-century, in fact he was my catcher when we played summer baseball way back when. Cornel is the second-best Orange high school star and McNeese state athlete who went into coaching football and was among the best in that profession--the other was R.C. Slocum., the winningest coach at Texas A&M. Cornel's recent announcement was not a big surprise, but it leaves some mighty big shoes to fill Good Luck Coach T.

And speaking of West Orange-Stark, the Mustangs' defensive lineman Carmello Jones was named Defensive Player of the Year of the prestigious Super Gold choices of high school athletes in the Golden Triangle. Vidor's Jeff Mathews was named this area's Football Coach of the Year for leading his team to an undefeated regular season and the District 10-4A-1 championship.

Nico Ali Walsh, grandson of boxing great Muhammad Ali, won his first professional bout Saturday night at Madison Square Garden in New York by scoring a 3-0 majority decision over Reyes Sanchez. The 21-year-old Nico Ali had taken his geology final a day before the bout. He is a business major at UNLV.

The Dallas Cowboys don't quite have their Doomsday Defense yet, but it's not because of rookie linebacker Micah Parson, who has recorded nine sacks in the last six games in a row. The only other NFL rookie to have sacks in six straight games was Hall of Famer Lawrence Taylor of the New York Giants.

And speaking of the NY Giants, former star defensive lineman and television celebrity Michael Strahan caught a ride into space with Jeff Bezos' rocket-launching company Saturday as Blue Origin's New Shepard rocket blasted off from West Texas near Van Horn, sending the capsule on a 10-minute flight. Strahan is a commentator on the Fox Sunday NFL pre-game show in addition to being a co-host on ABC's "Good Morning America". He took along his Super Bowl ring and retired New York Giants jersey No. 92 on the flight into space.

JUST BETWEEN US...I feel sorry for the hundreds of athletes who have worked their butts off for nearly four years getting ready for the 2022 Olympic Winter Games. They will have to endure all those Chinese Communists in Beijing who will be sneering at these young men and women in response to the United States planning to stage a diplomatic boycott of the Games because of China's human rights abuses, according to the White House early last week. China already has vowed to greet the move with "firm countermeasures". You rarely see athletes interfering with government business, so why should the government interfere with these athletes??