By Robert Vail
For the Record

A New Rod For Gramps 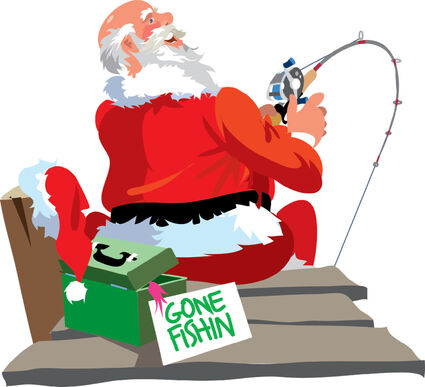 Young Cris had been going fishing since he was old enough to walk. Gramps, as he had called him, was raising Chris as best he could, living on a fixed income.

Cris’ parents were taken from him in a car crash wen he was only six months old, and his Gramps was just like a dad to him. Gramps had lost his wife to cancer a year before Cris was born, so the two of them needed each other very much.

Living within a mile of one of Texas’ largest bays, Cris enjoyed the time he and his grandfather spent on its shores. Gramps had spent many hours schooling him in the finer art of angling for redfish and he always admired the pretty copper-colored battlers that his gramps caught and later cooked for dinner.

Cris fished with push-button reel on a rod that was tattered and missing an eye or two. Limited as to what he could catch on his smaller outfit, he was just as happy catching croakers for Gramps to use for cut bait to lure the redfish they ate.

Gramps fished with an old knuckle-busting reel that had no drag and direct drive mounted on an old six-foot rod that was a little stiffer than he would like, but it was all he had, and he couldn’t afford a newer model, so he made do.

In the spring of Cris’ eighth year, he accompanied Gramps to a local pawn shop where Gramps was going to try to sell his old shot gun to help pay for some of his medical bills. Gramps reasoned that since he was too old to tromp the salt marsh after ducks any more, he might as well use the gun for something good.

While in the pawn shop, Cris noticed his grandfather wander over the rack of fishing rods in the corner and pick up a shiny seven-foot rod with a new, bright red Garcia reel on it. Gramps held the rod admiringly, sighting down the length of it. He tested it for balance and made several casts before setting it back in its place.

Cris knew then what he wanted to give his Gramps for next Christmas.

All summer long Cris did as many odd jobs as he could, saving every penny he earned mowing grass and washing cars. In between fishing trips with his Grandfather, he carried out the neighbor’s garbage, and as summer turned into fall, he raked leaves all over the neighborhood.

Finally two days before Christmas, he had enough money saved. Cris hopped on his bicycle and pedaled down to the pawn shop ... only to find that the rod and reel that his Grams had so admired had been sold only hours before.

Disappointed and with his gaze fixed on the ground, Cris slowly rode his bicycle back home. He knew he did not have enough money to buy Gramps a brand new rod and reel. He needed time to try and figure out what to do, and he knew no better way to think things over than go fishing.

Grabbing his push button reel and rod, he quietly slipped out the back door as Gramps napped in his chair. He figured he would be back before Gramps even knew he was gone.

When he arrived at the edge of the bay, he noticed that the tide was unusually high and the bay as calm as glass. Only the occasional swirl of a passing mullet dimpled the surface.

Cris had brought only one piece of cut mullet, because he didn’t really think he would catch anything, but he enjoyed the peace and solitude. Mainly he wanted to try and figure out what to do about Gramps’ Christmas gift.

Casting out his piece of bait, he held onto his rod but let his mind wander. Watching a lone seagull glide effortlessly overhead, he pondered what to do.

Suddenly he felt a sharp thump on his line. Then it slowly began to move to one side.

Reeling in the slack, he set the hook into what he instantly realized was a bigger fish than he had ever hooked. He pulled on his flimsily rod and reel as hard as he dared, and to his amazement, the fish began to swim toward him. Reeling for all he was worth, he had the huge fish wallowing in the shallows at his feet before he knew it. He reached down and gently slid his hand under the gillplate of the huge red, hefting it to better admire it.

When he lifted the fish, he noticed a shiny new hook in the opposite corner of its mouth. String was still attached to the hook and it dipped into the water. Laying the fish on the bank, he grabbed up the string and began pulling. He felt a resistance from something on the other end of the line.

Tugging harder he saw the tip of a rod break the mirror surface. Giving a final yank, he couldn’t believe his eyes when a new rod and Garcia reel--just like the one in the pawn shop--emerged from the water.

Turning his attention back to the huge redfish, he found that it was gone. Somehow that fish had thrown that hook and disappeared.

Did it flop back into the bay? How on earth did that fish vanish without so much as a splash?

Cris looked around for signs telling how that fish had disappeared when he noticed a short, round man in a red suit with black knee boots disappear into a stand of sea cane nearby.

One thing he knew for sure: that redfish had delivered a brand new, shiny rod with the bright red Garcia reel that he had worked so hard for all summer long.

He gathered his things and started for home on his bicycle knowing--kind of--what had just happened. Arriving there, he hid the new rod and reel in the garage and slipped back inside just as Gramps was stirring from his nap.

On Christmas morning, he was up before Gramps, placing the now clean, shiny new rod and bright red Garcia reel under the evergreen tree with the glittering golden star attached.

The smile that lit Gramps’ face when he saw the new rod and reel was the best Christmas gift Cris could have received. He knew he and Gramps would spend plenty of quality time together in the days to come, sitting on the edge of the bay in pursuit of the mighty redfish.