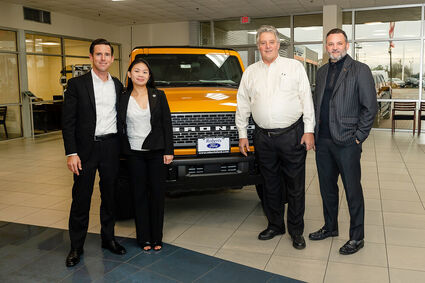 Susanty Roberts' background is in finance. Husband Craig Roberts has been in the car biz since he got out of the service during the Cold War.

Together, they hope to bring some sizzle to Orange automobile sales with their purchase of Sabine River Ford earlier this month.

The new Roberts Ford is open for business with a lot full of gleaming F-150, F-250 and F-350 pickups ready to drive out.

"We're here to help the community," Susanty said, "and hope the community will help us. We want everybody to work together."

The car business is in a state of change, thanks to supply chain shortages caused by factory shutdowns around the world the past two years as a result of the coronavirus pandemic.

"We're stocked up on used cars but we have no control over new cars right now," her husband, Craig, said. "They're allotting us some. We'll probably have them back on the lot in 60 to 90 days.

"But the manufacturers have figured out it's more profitable when the new cars are already sold [when shipped]."

Susanty Roberts, a native of Indonesia, came to the United States from her home country of Indonesia nearly two decades ago, earning a finance degree from McNeese State and an MBA from Tulane.

She worked in finance for a commercial real estate company, then was controller for an independent car dealer service managing a $25 million portfolio.

"She worked for a friend of mine," Craig Roberts says, explaining how the couple met.

Craig and Susanty were partners in business before they married five years ago. Most recently Craig, Susanty and Mitchell Roberts, Craig's son, worked together managing a used car dealership, Arriba Motors, in suburban Houston.

A native of Wisconsin, Craig Roberts served in the military abroad, mostly along the Berlin Wall in West Germany, before landing in a Houston car dealership.

"I've been at for 38 years," he said. "My son [Mitchell] has been with me since he's been walking and my wife liked the car business, and wanted to get into the car business with me.

"She wanted to be in the new car business."

Susanty and her stepson Mitchell are the dealership's co-owners. Craig Roberts is a partner.

Will Palasota, general manager at Roberts Ford, has 26 years experience with large dealerships, in in Dallas and South Carolina, most of it as general manager.

"What most people don't understand is that there are only 17,000 factory franchises in the United States," Palasota said. "A Ford dealership is the hardest franchise to get and their approval was very smooth – especially for a first-time franchise store.

"They decided not so long ago [to apply for a franchise] and all of a sudden, they're franchise owners." 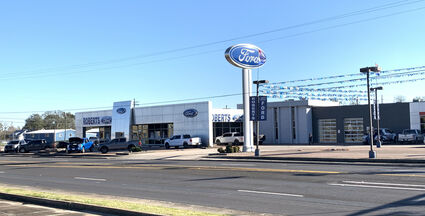 "We are very fortunate," Craig Roberts said. "Susanty is a structured person. She knows the only way to survive is to be connected to a manufacturer like Ford."

"We're all from different backgrounds. We all grew up different ways," he said. "Mitch has been working with Craig 30 years. But all the individuals worked together to make it work."

The new owners do not mean sweeping changes.

"We kept all the old employees – 47 of them," Craig Roberts said. "Some of these people have worked here for 40 years.

"We didn't want to change everything for the community. We wanted to keep it status quo.

"We're trying to learn as much as we can from them. We need each other."