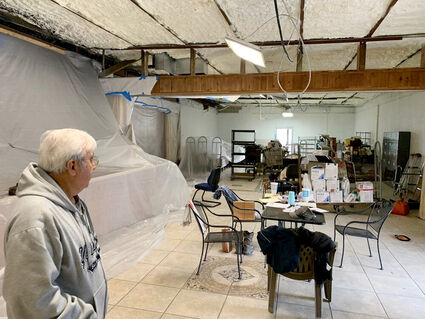 Christmas will taste different this year for many Orange County fans of Christmas turkey.

Someone else is getting that business this year.

But not for long, Ramirez said.

He hopes to reopen Robert's Meat Market as soon as his new equipment comes in.

And, in a departure from earlier statements made after a fire in July brought his business to a halt, Ramirez says he now plans to reopen his adjoining Steakhouse restaurant – but only for lunch.

He hopes to have it open by Easter.

"I'm just waiting on equipment," Ramirez said. "I ordered walk-in coolers a month ago. They've been saying, 'Next week, next week," for about a month.

"And the same goes for the restaurant equipment, the tables and chairs."

The July 29 fire was at the back of the structure at 3720 W. Park that housed the meat market and the restaurant that seated up to 400.

But smoke and water damage ruined most everything.

"It's been a nightmare," Ramirez said. "One of the reasons I'm not trying to open the restaurant so fast is because of Covid."

The outbreak of COVID-19 in March of 2020 caused a two month break in in-person dining, then initially allowed just a 25% occupancy for a time. 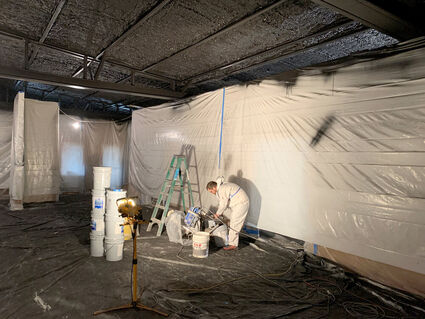 An employee works Monday to paint the ceiling of the main dining room of the restaurant at Robert's Meat Market and Steakhouse as repairs continue after a fire earlier this year.

Subsequent spikes, tied to holiday gatherings and the introduction of the delta and omicron variants, have dragged out the changes in business as usual.

Initially after July's fire, Ramirez was able to use many of his 40-plus employees to clean out the damage. A half dozen of those are still working to rebuild and retouch things.

This week, workers power washed the sidewalk in front of the building while others painted ceilings and trim work.

The rebuild includes a 60-foot addition to the back of the building, which will allow additional dining space.

Ramirez says he doesn't expect any supply chain problems with his food.

"I shouldn't have any problems getting meat," he said. "I've stayed in touch with my suppliers.

"The problem is everything's price is so high now. Nobody asks, 'How much is it?' just 'Do you have it?'"

Ramirez opened his Meat Market in 1980 on Simmons Drive. It has operated at the Park Avenue location since 1990.