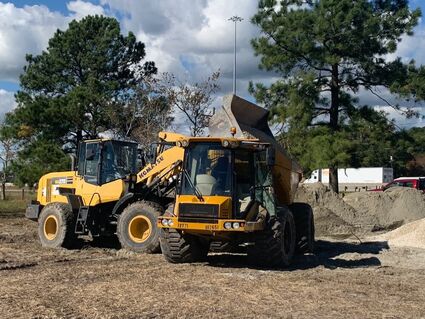 As the Year 2022 looks forward to taking off at midnight Saturday, Orange County leaders are looking to the west for a sign.

They’re all awaiting Chevron Phillips Chemical officials headquartered in The Woodlands to disclose a go or no-go decision on a building a $6 billion ethylene plant on the southeast side of the county, north of the current Chemical Row, FM 1006.

“We just want to try to get completed with this [hurricane] recovery stuff,” Orange County Judge John Gothia said, beginning his answer when asked his New Year’s goals for the county.

“And then,” he continued, “I’d like to see some of these potential projects that are out there lurking – new facilities and expansions – hopefully we get some good news on those.

“That’s kind of the hope at this point.”

Besides the possibility of a full-blown Chevron Phillips Chemical plant across Texas 87 from the Orange County Airport, an expansion of the Entergy Texas power plant west of Bridge City has been announced.

Coupled with Chevron Phillips Chemical plant, the two would mean more than 1,500 construction jobs over a four- to five-year period.

Still awaiting an official go-ahead is the Gisela Houseman Medical Center set to be located south of Interstate 10 at Highway 62.

Contractors for the City of Orange are at work on Eagle Point Parkway, which would provide access to the site.

“I’m hoping that economic development prospect [the Chevron Phillips Chemical ethylene plant north of Chemical Row] gains a little more traction and we hear that our county is going to be the chosen site. I’d like to see more work going on out there.”

Besides recovering from the record-setting rains of Hurricanes Harvey in 2017 and Tropical Storm Imelda in 2019, the county has had to deal with destructive winds from Hurricanes Laura and Delta last year.

And then there’s the COVID pandemic, which has been ongoing since March of 2020. Cases here are starting a spike from the omicron variant.

“I think COVID is going to hit us for a little while but hopefully this omicron variant won’t be as severe,” Rutledge said. “After that, I think things will pick up across the area.

“I see some businesses coming in, some improvements along Texas Avenue.

“We continue to work with the county and Drainage District to keep drainage improvements moving forward.

“I predict that we’re going to continue to work on improvements in West Orange in order to turn the city into a vibrant place that people want to move to and live.

“I know we’re supposed to be getting a CP Chem plant and hopefully we use the grant funds we have to make this place look a little better.”