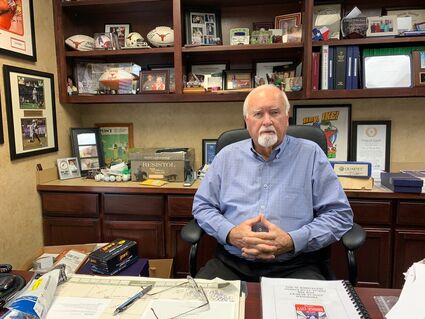 Jerry Jones, longtime city manager for Bridge City, is set to retire Jan. 15 after 22 years of employment with the city.

Jerry Jones was just making the jump from Director of Bridge City's Public Works Department to the office of City Manager in September of 2005 when Hurricane Rita blew through the area on the heels of Hurricane Katrina hitting New Orleans.

But Jones really earned his spurs as city leader, working with Mayor Kirk Roccaforte three years later as Hurricane Ike did its best to wipe the city off the map.

A Category 2 storm of 100-plus winds sent a surge of up to 14 feet of water sweeping over south Orange County and left only 16 of Bridge City's 3,000 or so homes without significant wind  and/or water damage.

"We've gone through several hurricanes and rebuilt," Jones said Tuesday, "but getting through Ike alone was the major challenge we've faced."

Jones is retiring as of Jan. 15 after 16 years as city manager, having served the previous six years as public works director.

He and wife Sherlon live only a couple of blocks away from City Hall and plan to remain there. Jones expects to be a regular at grandkids' games and school assemblies.

"We've got a ton of grandkids and a bunch of family here," he said. "We want to enjoy them all."

A native of Silsbee and a huge University of Texas sports fans, Jones had many pieces of Longhorn memorabilia – footballs, plaques, photos, even a UT golf bag – remaining in his office Tuesday.

As he spoke David Rutledge, Bridge City's mayor, sorted through the dozen applications the city has received to succeed Jones.

City Council held a pair of closed-door executive committee meetings earlier this month to discuss what they were looking for in their next city manager.

Rutledge said he expects a couple of more executive sessions with a goal to name a new city manager by the end of January.

"We're reviewing applications to see which ones are going to best fit our city," the mayor said. "We expect then to interview two to four of the 12 applicants we've received.

"It's hard to put a timetable on it, because there are a number of variables."

Rutledge acknowledged that a new hire might need a few weeks to get on the job, what with giving notice to the employer they're leaving and wrapping up other loose ends.

"It helps because Jerry has graciously volunteered to help us out with advice if we need it. If we need something, we'll call. And if he's out fishing, we'll wait for him.

"And we won't have anybody sitting in this (city manager's) desk until we hire his replacement. We're not hiring any interim managers. The department heads will carry on."

Bridge City lost about 10 percent of its population after being hit by two hurricanes in 36 months (falling from 8,600 in 2000 to 7,800 in 2010). The Census Bureau has yet to release an official population total from the 2020 census, but there's no doubt the number of residents is rising fast.

"The housing stats are way up. It's almost impossible to find rental property," Jones said. "We're looking at the plants coming in the next few years (the still to be finalized Chevron Phillips Chemical plant and a second power generation unit at Entergy). That's really going to put a strain on housing."

Besides dealing with hurricane recovery, the top achievements of Jones' tenure include:

Extending water and sewer lines, expanding the sewer plant and building a water tower on FM 408;

Installing filters on the water system to eliminate the "brown water" caused by iron and manganese.

But Ike, which Jones called, "a once in a lifetime" event, will stick with Jones. Because he and other city and county leaders used it to write the book on emergency response.

"The biggest thing we did when we came back in was get the water and sewer plants operational as soon as we could," he said.

"The second thing was to clear the roadways, because they had 2-6 inches of marsh silt covering them. It was very slick and cars couldn't drive on them.

"We were basically trying to get everything cleared out so people could come back."

Electricity was out for weeks or months for parts of the city. 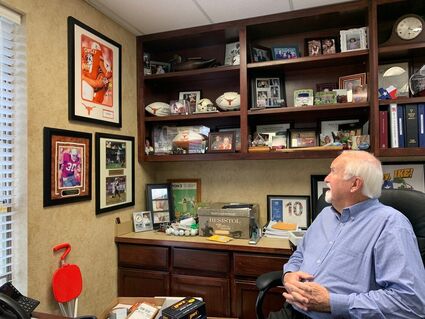 "Basically, everything everybody had was destroyed," Jones said. "We set up a shelter at the Public Works warehouse (next to City Hall) and two guys worked every day cooking so we could feed everybody.

"After that, we started to get generators for our (sewer) lift stations. We had a fuel truck bring in fuel for everybody. Before we left town [evacuated], we had established contracts for fuel and generators. When they could get in, they supplied us pretty quickly.

"It was a slow process, but one of the major things we did was allow people to park travel trailers and FEMA trailers in their yard, so they could stay here and work in their houses.

"That was the biggest thing: People could stay here and get the cleanup started quickly."