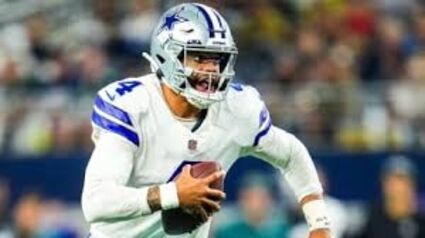 With only two more weeks remaining in the 2021 regular National Football League season, there are still a smattering of teams that don't know where they will be two weeks from now-in the postseason playoffs with a bye week, having the home field in the wild-card week, making the playoffs and waiting for an opponent, or already eliminated from the playoffs.

Our Houston Texans fall into that latter category-in fact, they were the first of the 32 NFL teams to officially be eliminated from the playoffs-and it happened a couple of weeks ago. The half-empty stadium Sunday verified that fact.

But those diehard Texans fans who did attend the game, saw perhaps the best effort of the year at NRG Stadium by their hometown heroes as they outshined the Los Angeles Chargers 41-29, and that's after a "garbage-time" touchdown by the confused visitors near the end of the game.

Although Houston was a whopping 10½-point underdog, the only time the Texans trailed in the game was 3-0 in the first five minutes after a Chargers field goal and 12-7 early in the second period.

The Texans' advance scouts found out the Chargers had trouble stopping the run and Houston plowed through their defensive line 36 times for 191 yards rushing, with tailback Rex Burkhead getting 149 of them on 22 carries and two touchdowns.

What made this victory so special was the fact the Texans had to replace 18 players who were sidelined with positive COVID-19 tests and had to be replaced by members of the practice squad, many of whom never played a down in an NFL game. It was almost like the preseason exhibition games when many players' names were unfamiliar to the fans.

And these "strangers" had a chance to showcase their talent, and they did a marvelous job. In fact, the Monday's edition of the Houston Chronicle that rates each position of every game gave out only one B, with the rest of the grades being A's or A-plusses.

For the first time in his brief career, quarterback Davis Mills had a running game to complement his passing (21 of 27 for 254 yards and two touchdowns with zero interceptions). Houston led just 17-15 but then erupted for 24 points in the fourth quarter to seal the deal and probably bounced the Chargers out of a possible playoff spot.

But the Texans upset victory didn't impress the Las Vegas Boys whose early line on Sunday's game at San Francisco had the 49ers as a whopping 15-point favorite.

The biggest problem I see for this game is which players are going to be sent back to the practice squad as the COVID-19 players return healthy and ready to play. It's not a bad problem to have.

Teams that have already won their division championships include the Dallas Cowboys, Kansas City Chiefs, Green Bay Packers and the Tampa Bay Buccaneers. But those four teams will be playing hard this week and next week to get that first-round bye that goes to the team with the best record in each conference and also gets the home field for the entire playoffs.

The Los Angeles Rams and the Arizona Cardinals have both made the playoffs and are competing for the NFC West Division championship.

Cincinnati and Baltimore are battling for the division championship in the AFC North title while Buffalo and New England are deadlocked for first place in the AFC East Division.

Jacksonville, New York Jets, Carolina, Chicago, Detroit and the New York Giants join the Houston Texans as teams eliminated from the playoffs, with the remainder of the teams still hoping to make the playoffs as a wild card.

KWICKIES...The Dallas Cowboys continue to play better and better as the NFL regular season enters its final two weeks of play. They completely brutalized the Washington Whodunits Sunday night 56-14 to clinch the NFC East Division title. It was their largest win since 1980. The Pokes will have a tough time hosting the faltering Arizona Cardinals Sunday at Jerry's Palace in Arlington and should find out just how good they might be.

Kansas City quarterback Patrick Mahomes is 22-0 during his career in the months of November and December. The last loss the Chiefs suffered with Mahomes at quarterback during these two months was in November 2019 when the Tennessee Titans blocked a game-winning attempt of a field goal and won the game.

Two bowl games-the Fenway Bowl and the Military Bowl-have been canceled due to COVID-19 with Friday's Sun Bowl in jeopardy. Washington State still had no opponent at this writing after Miami couldn't field a competitive team due to COVID-19 for the El Paso event.

Cincinnati's second-year quarterback Joe Burrow threw for 525 yards (the fourth most in NFL history) as the Bengals ripped Baltimore 41-21 and took over first place in the AFC North Sunday. The former LSU star threw four touchdown strikes in the victory.

Nevada, which played Western Michigan in the Quick Lane Bowl Monday, has a quarterback (Dave Cox) who stands at 6 foot 9 inches tall.

JUST BETWEEN US...When the Buffalo Bills upset New England 33-21 Sunday, they became the first team to beat the Patriots at home in consecutive seasons since the Indianapolis Colts turned the trick in 2005-06. The Pats are now 3-5 at Foxborough, their first season with a losing record at home since 2000. I still think Bill Belichick will find a way to get his team into the upcoming playoffs.