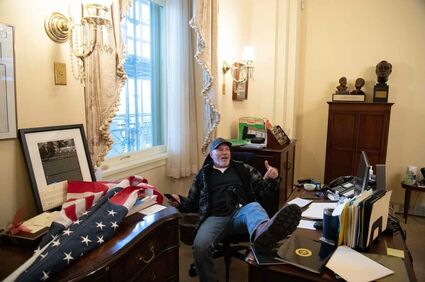 Richard Barnett, of Arkansas, sitting in Pelosi's office during the attempted insurrection on Jan. 6, 2021, has been arrested and charged. I'm outraged like many from my generation. In 1962 Joe Runnels and I visited Speaker Sam Rayburn in his office and were allowed to take a short tour of the White House. We were in Washington for an appointment with Vice-president Lynden Johnson. That visit to the nation's capitol has left a lifelong impression on me. The promoters and those involved should all be severely punished.

It was a dark day in the U.S.A. on Oct. 24, 1929, the day the Great Depression began. The stock market crashed investors and wealthy people lost everything. Many committed suicide, jumping out of skyscraper buildings. No one was spared.

Two of my father's brothers, who owned Dunn Brothers, the country's largest pipeline stringers, lost everything with the exception on one brother who had a banker friend who tipped him off before every bank in the country went into lockdown. He was able to retrieve some money. That started a long dark time in this country that lasted until the Pearl Harbor attack and the United States entering WWII. The war effort turned into jobs in some parts of the country like Orange, Texas.

It didn't do much for us in Cajun country that didn't have any kind of manufacturing. President F.D.R. replaced President Hoover and put in programs like the CC Camps and W.P.A. but mostly he asked all Americans to put their shoulders to the wheel to help save our country. He spoke to the countrymen with his Fireside Chats. Everyone helped secure scrap metal for the war effort. The President asked that communities and neighborhoods to plant Victory Gardens. One such place was a community across the bayou from what is present day Bridge City.

A 50-acre garden was planted by several families to help feed local residents. The location is still called Victory Gardens. Almost everything was rationed. Stamps were required to buy limited amounts of commodities. I was raised during those depression and war years. I know what it is to have your only pair of shoes have cardboard soles. I know what it is to sacrifice for your country. Many of the young soldiers from my community came home from the war maimed or in body bags. The most feared person was the Western Union man coming to some parent's door. I mention all of the above to make a point.

There has been many other dark days in my lifetime, the murder of President John F. Kennedy, the Korean and Vietnam wars, along with the other conflicts. Pearl Harbor was a sneak attack by the Japanese, 9-11 by Bin Laden foreign agents. We've had fires, storms, tornadoes and many other natural disasters.

Americans always came together as one nation to confront whatever was dealt us. Never since the Civil War have Americans turned against themselves. Never once has there been a domestic uprising to overthrow our government and destroy our Constitution.

Never before have we witnessed a United States President, while in office, turn against his own government. January 6, 2022, marks the first anniversary of the insurrection on our national capitol.

President Donald Trump sent a mob to the Capitol. His goal was to stop the verification of Joe Biden as the newly elected president of the United States. Biden beat Trump by 7 million popular votes and a large margin in the Electoral College. Trump watched on television from the White House the destruction that was going on at the Capitol. Reports are that he was enjoying what he was seeing. He called the insurrection a display of "Spirit, Faith and Love." Rioters broke windows, stole items, crapped and urinated on the floors.

Outside the Capitol the mob set up a gallows, with a noose, to hang Vice President Mike Pence because he refused to go along with Trump's move not to certify the election by way of Electoral College from every state. Millions of Americans watched the events in Washington unfold on live T.V. Police officers testified to the violence and mayhem. Criminal proceedings in open court detailed what happened. Yet the hoaxes, conspiracy theories and attempts to rewrite history persist, muddying the public understanding of what actually occurred during the most sustained attack on the seat of American democracy since the War of 1812.

By excusing former President Donald Trump of responsibility, minimizing the mob's violence and casting the rioters as martyrs, falsehoods about the insurrection aim to deflect blame for Jan. 6 while sustaining Trump's unfounded claims about the free and fair election in 2020 that he lost. Spread by politicians, broadcast by cable news pundits and amplified by social media, the falsehoods are a stark reminder of how many Americans may no longer trust their own institutions or their own eyes.

Several different conspiracy theories have emerged in the year since the insurrection and Trump continues to push the "Big Lie." After six months of intense work, the House committee investigating the Jan. 6 insurrection is preparing to go public. They've interviewed more than 300 witnesses, collected tens of thousands of documents and traveled around the country to talk to election officials who were pressured by Donald Trump. In the coming months, members of the panel will start to reveal their findings against the backdrop of the former president and his allies' persistent efforts to whitewash the attack and reject suggestions that he helped instigate it. The committee also faces the burden of trying to persuade the American public that their conclusions are fact-based and credible The nine lawmakers, seven Democrats and two Republicans, are united in their commitment to tell the full story of Jan. 6, and they are planning televised hearings and reports that will bring their findings into the open.

Never again can we allow our democracy to be under domestic attack. Never again should we elect a president whose goal is to change the country to a dictatorship.