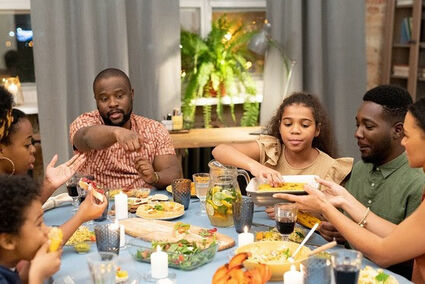 The Covid-19 pandemic upended many family dynamics but one positive consequence of this upheaval: Parents shared more dinners and read to their children more often, according to the U.S. Census Bureau's 2020 Survey of Income and Program Participation (SIPP).

Many families spent extra time together in spring and summer 2020, when lockdowns were in place in many parts of the United States.

Most interviews for the 2020 SIPP were conducted during March-June 2020. The data show that parental interactions with children changed from prior years: While parents shared more dinners and read to children more often in 2020, they also took them on fewer outings.

There were, however, big differences depending on parents' socioeconomic characteristics. Frequent outings with young children dropped for most parents, but more so for parents with fewer economic resources. And parents who were married and more educated read more often to young children.

The SIPP collects information on child well-being, including details on parental involvement with children.

The survey also asks how many outings the reference parent or other parent took their young children ages 0-5 on and whether they or another family member read to them. All of these behaviors have been associated with improved child well-being and family dynamics. All estimates shown are at the reference-parent level at the time of interview.

Impact of COVID-19 on Parental Involvement

Most likely as a result of Covid-19 lockdowns in early 2020, the proportion of parents taking their young children on outings two or more times a week dropped from 87% in 2019 to 82% in 2020. The frequency of children's weekly outings with their other parent were not statistically different across those same years (about 67%).

There was only a one percentage point increase in shared dinners from 2018 (84%) and 2020 (85%). But the change was statistically significant and coupled with the dip in outings, resulted in shared meals becoming the most common type of parental involvement in 2020.

The proportion of shared meals between children and their other parent, as reported by the reference parent, also rose, from 56% in 2018 to 63% in 2020.

Plus, parents or relatives read to children more often in 2020 than in prior years.

Across all but one (poverty) of the characteristics considered, the proportion of parents taking kids on frequent outings dropped four percentage points from 2019 to 2020.

Frequent parent-child outings decreased in 2020 compared with 2019 for many reasons, including shutdowns and travel bans.

Many places that families typically visit like restaurants and malls closed and travel, both domestic and foreign, was discouraged or banned during the pandemic.

Families have struggled during Covid-19. Many have had to juggle work and child care responsibilities while also facing food insufficiency and financial hardships such as job or wage loss.

For example, unemployment, stimulus and Child Tax Credit payments have been used to pay for the basics like food, rent, and paying off debt, leaving little discretionary income for outings.

Solo parents - those with no spouse or cohabiting partner present - experienced an 11 percentage point drop in frequent outings with young children: 75% reported going on two or more outings a week in 2020 compared with 86% in 2019.

Although younger solo parents are typically more involved than older solo parents with young children, young adults experienced some of the highest levels of job loss due to the Covid-19 downturn which may have impacted their involvement with their children.

Even parents with more resources did not take their children on outings as frequently. That includes parents with more education and married parents who may alternate child care responsibilities. Frequent outings among those socio-economic groups dropped about four percentage points in 2020 compared with 2019.

Results for parents in poverty were not statistically different during the period examined (2019 and 2020), which may be due to no real changes or to nonresponse issues (described further below).

Groups who read to their young children more frequently:

Highly educated parents with a bachelor's degree or more read to their kids frequently at a higher rate than all parents in 2020: 81% compared to 69%.

These characteristics are associated with certain advantages, like higher income, residential and family stability and white-collar jobs with flexible work schedules. That may have allowed these parents to leverage their resources to be more involved with children during the Covid-19 pandemic.

Comparisons of reading together between 2019 and 2020 were not statistically different for parents with fewer resources: poor, solo, and foreign-born parents, which may be due to no real change or to nonresponse issues described below.

However, there is plenty of evidence showing that parents with fewer resources suffered high levels of job losses.

The 2020 SIPP had high nonresponse rates, meaning that many people who were asked to participate in the survey did not. Additionally, there was nonresponse bias, that is, the characteristics of those who responded were different than those who did not respond.

Consequently, reference parents who reported on their involvement with children in SIPP were more likely to be older, foreign-born, married, more educated, and above the poverty level than in the two prior years.

The proportions of parents who were foreign-born or married were not statistically different between 2019 and 2020, but the 2019 SIPP also experienced higher nonresponse rates due to the 2018-2019 lapse in federal funding that stopped operations and other factors.

The results discussed in this story may have been impacted by nonresponse.

The Survey of Income and Program Participation is a nationally representative longitudinal survey administered by the U.S. Census Bureau that provides comprehensive information on the dynamics of income, employment, household composition and government program participation.

Yeris Mayol-Garcia is a survey statistician in the Census Bureau's Social, Economic, and Housing Statistics Division.