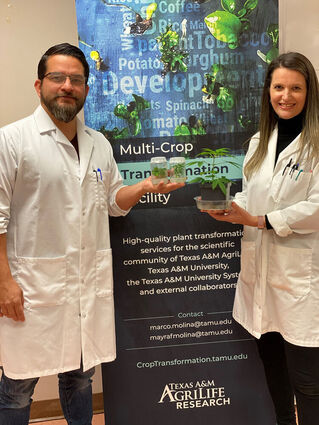 Marco and Mayra Molina show in vitro and ex vitro examples of hemp plants at their lab on the Texas A&M campus. (Texas A&M AgriLife photo)

Farmers can look forward to a future in which their industrial hemp crops have optimal phenotypic and trait characteristics, including the potential to completely eliminate the expression of Delta-9 THC.

Delta-9 THC is one of the plant cannabinoids with psychoactive properties that occur in the marijuana plant and are present in the hemp plant in much smaller quantities, less than 0.3%. Hemp crops with Delta-9 THC levels above 0.3% may be impounded and destroyed, so producers must be extremely careful to not allow their CBD, fiber or grain hemp crops to exceed that threshold.

Texas A&M AgriLife Research and Growing Together Research Inc., GTR, undertook a partnership in August 2020 to develop and optimize protocols for genetic transformation of industrial hemp for commercial use cases. GTR is an Indiana-headquartered biotechnology company focused on computational genomics and bioengineering of the hemp organism.

The project combines AgriLife Research's strengths in plant transformation with GTR's experience and capabilities in gene discovery and computational bioinformatics and genomics.

Marco and Mayra Molina show in vitro and ex vitro examples of hemp plants at their lab on the Texas A&M campus. (Texas A&M AgriLife photo)

"Together, we are developing a hemp line that will essentially produce zero Delta-9 THC, and therefore guarantee lower than 0.3% THC levels under any growing environment," Thomson said.

"We are delighted to partner with AgriLife to show that it is possible to fully unlock the promise of industrial hemp for American farmers," said Sam Proctor, chief executive officer of GTR. "AgriLife and GTR are demonstrating that industrial hemp, like other agricultural commodities, can be studied and analyzed for the benefit of producers, consumers and other actors in the supply chain."

Hemp is known to be difficult to perform stable genetic transformation, largely due to a very low shoot regeneration rate, said Marco Molina. Marco and Mayra Molina are developing and testing protocols for hemp transformation and characterizing transformed progeny.

"We are responsible for executing hemp transformation in the laboratory after receiving the plasmid/construct with the gene of interest," Marco Molina said. "So far, we have seen very successful and promising results." 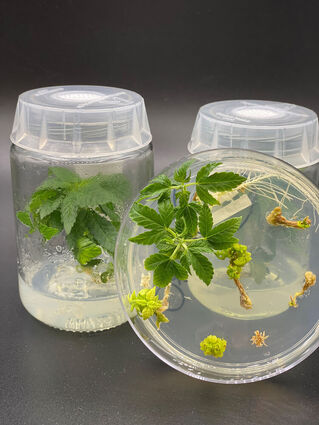 According to Carl Muntean, AgriLife Research acting director for corporate engagement and research support, this project demonstrates the advantages of successful collaboration between AgriLife Research and private sector partners that focus on connecting scientific advances with real-world commercial applications.

The recent success has set the stage to move industrial hemp into the mainstream, similar to mass-market agricultural commodities such as corn and soybeans that have been transformed and optimized by market participants for decades, Proctor said.

GTR has partnerships with wholesale hemp producers that provide avenues for commercialization.

"One of the most exciting aspects of this collaboration is the direct connection between scientific research and direct benefit to market participants," Proctor said. "There is a clear need for American farmers to have more and better options when it comes to growing legally compliant industrial hemp, and the collaboration between AgriLife and GTR can deliver that result."